The UCF Knights advance to the final four of the NIT, and will play TCF next week.

UCF was the fourth-seed in the bracket and Illinois (20-15) No. 2. But due to an arena conflict (a touring production of “42nd Street” played at State Farm Center Wenesday night), the Fighting Illini couldn't host the game. The Knights took advantage with the first sellout crowd in 10,000-seat CFE Arena history to move within one win of tying for the most in school history.

Both teams had five 3-pointers in the first half but Illinois only had two other baskets, shooting 7 for 26 to fall behind 34-19.

UCF pushed the lead to 19 midway through the second half and was up 52-37 before Malcolm Hill rallied the Illini.  Hill hit back-to-back 3-pointers and then made three free throws with 3:14 to play to cut the deficit to six. But Davis made 5 of 6 free throws from there and Taylor was 6 of 8 in the final minute.

Hill had 29 points to finish his Illini career with 1,846, third all-time. Jamall Walker went 2-1 as the interim coach after replacing John Groce, who was fired after the Big Ten Tournament. Illinois introduced Oklahoma State coach Brad Underwood as its new coach on Monday. 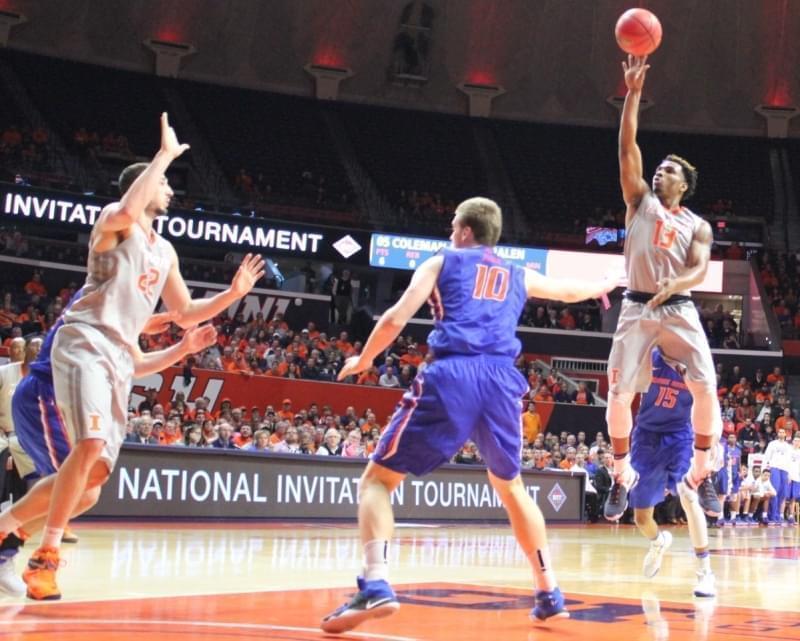