Illinois' unprecedented budget impasse has ended … for now, and just in the nick of time. The governor signed, and legislators passed, a partial budget Thursday, on the final day of fiscal year 2016. But it's only a temporary salve.

The stalemate went longer than anyone thought possible.

Meanwhile, a public university threatened to close; others laid off faculty, chasing students out of state. And polls show residents' faith in their political leaders justifiably sank.

For a full year, that didn't seem to sway either Governor Bruce Rauner or the Democrats who control the General Assembly.

Rauner was holding out for passage of his controversial, so-called "Turnaround Agenda."

Democrats were holding out for him to drop it.

In a way, that's what happened.

"Many previous efforts to implement a more comprehensive budget failed due to the governor's insistence on the inclusion of his agenda that would drive down middle class wages and standards of living," House speaker Michael Madigan said in closing remarks on the House floor. "The difference today is that the governor has dropped his demand that his agenda be considered before a budget could be approved."

Madigan is the man often credited - or condemned, depending on your perspective - for refusing to concede to any of the governor's demands.

It's true that Rauner did not tie the temporary spending plan to things like making it harder for injured workers to be compensated, or diminishing union rights.

But Rauner has not abandoned his agenda, and when asked said he did not regret holding out for its passage, regardless of the consequences of not having one in place since last summer.

Rauner says what passed isn't a *budget* -- it's a bridge.

A compromise that will get the money flowing.

In that, at least, he has agreement from Democrats like Senator Donne Trotter of Chicago.

"It's more of like a pressure release valve, that will allow people just to breathe a little bit more but we certainly are not undoing the damage that we've done to this state by not working together, by not doing our jobs," he said.

The package relieves pressure pretty much across the board.

The governor had warned that absent a budget, construction on roads would stop. Instead, major roadwork will continue after the holiday weekend.

And social service groups -- think cervical cancer screenings, programs for autistic kids, homelessness prevention -- will finally get paid for work the state contracted them to do.

The Rauner administration itself will have the authority to pay the state's utility bills.

And school superintendents from poor districts worried their classrooms could see no state funding will instead get an increase.

That includes Chicago Public Schools; CPS could also see a windfall if the city council approves a property tax hike, as authorized in the budget package.

That comes despite Republicans' repeated insistence they would NOT help Chicago with what they derided as a “bailout." Senate GOP Leader Christine Radogno says this isn't one.

"There is no Chicago bailout," she said. "What has traditionally happened in this state is when there's a crisis in the city, the city legislators come hat in hand and ask for a state bailout. That did not happen. We held firm on that."

As in, Chicago will only get more than $200 million from the state if, and only if, the General Assembly gets on board with something Rauner wants. Something that will ease the state's financial pressures: an overhaul of government pensions.

It's a calculated political tradeoff.

Republicans give in to something Democrats want: helping CPS and other districts that have a lot of kids in poverty.

But Democrats have to agree to cutting state employees' retirement benefits -- something that their union-heavy base will not like.

In other words: a compromise.

That's why the measure sailed through the House and the Senate with little opposition.

Little, but not none.

Both sides get another win,too: Lawmakers can finally tell voters they've done something. Illinois, at long last, has a budget!

Or, a partial one, anyone.

While K-12 schools get a full year of funding, everything else is just enough to cover operations ... until just after the November elections. 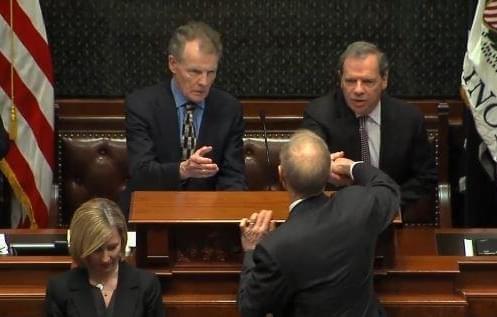