Michael J. Madigan's #MeToo problem might be what eventually topples the mighty but unpopular politician from the chairmanship of the state Democratic party, at least that's what several political observers predict. And his problem may grow worse, affecting his role as speaker, some say, if more women in Madigan's orbit come forward to say they've been harassed.

His headache started in mid-February, when campaign worker Alaina Hampton reported that Madigan's staff had still not reacted formally to her November claims of sexual harassment against her supervisor. The speaker fired the supervisor, high-ranking aide Kevin Quinn, hours before the Chicago Tribune published a detailed story about Hampton's experiences. Then she filed a formal complaint in Chicago with the federal Equal Employment Opportunity Commission, charging that she had been the victim of retaliation for making harassment allegations.

Within the week, Madigan "parted ways" with another operative from his campaign organization because, according to the Tribune, of "inappropriate behavior by a volunteer toward a candidate and staff."

That second revelation further fueled calls for investigations and demands that he step down as party chairman, a post he has held for two decades.

As Kent Redfield, an emeritus political science professor at the University of Illinois Springfield, says, it would have been inconceivable a little over six months ago that Madigan's political future would become a bit rocky.

Redfield and others say Madigan, 75, is clearly the most powerful politician in the state and perhaps the most powerful legislative leader in the country. His clout is intensified because he is the only House speaker in the country to also serve as state party chair. And he is the longest-serving speaker in the nation, having risen to the post in 1983 and hanging to it for all but two years in the mid-'90s.

But then the #MeToo movement brought sexual harassment out from the shadows, taking down politicians, including two congressmen, and high-profile leaders in other industries.

Madigan has weathered other situations that could have shaken his power, including complaints of conflict of interest because his law firm represents clients seeking Cook County property tax appeals.

"It does create a conflict that the members … who are elected on the board of appeals, tend to go along with his request in nearly every instance, so he is in some ways using his governmental power and his political power to benefit his clients, and his clients are paying him in the millions of dollars, but that hasn't shaken him,'' says Dick Simpson, a political science professor at the University of Illinois Chicago.

Chris Mooney, another political science professor at the University of Illinois Chicago, says Madigan is a skilled politician who has avoided scandals, but the #MeToo movement is out of his wheelhouse. The issue is a curve ball for Madigan, Mooney says. "Can he hit the curve ball?"

This issue won't be easy to control, the observers say.

"This is a much more emotional issue, particularly many women (and) a lot of men can identify with this as being wrong at an emotional level, not just theoretical conflict," Simpson says.

"There seems to be considerable pressure rising to have him replaced as head of the party in Illinois, but not before the March 20th primary,'' he says. It will be after that primary that the state's county Democratic party chairs gather within 40 days of the election to vote for party chairman.

As Madigan pointed out at a recent press conference, many of those higher-profile people calling for his departure as chairman of the party are politicians in races for higher office.

Two of the front-running candidates in the Democratic gubernatorial primary, state Sen. Daniel Biss and Chris Kennedy, and several of the candidates in the race to succeed Madigan's daughter as attorney general called for his ouster as party chairman.

"I'm not resigning,'' Madigan told reporters at two press conferences after the Hampton revelation. "I'm moving forward. I'm working with this particular issue, and we're going to work our way through it, and we're going to provide good strong leadership as I've done for several years.''

"It ain't gonna happen,'' says Madigan's spokesman Steve Brown, clarifying that his boss has no plans to give up his positions of speaker and party chair.

On Tuesday, Madigan sent a message to his caucus - and the media - that made it appear as though he is feeling some heat:

"I want to be crystal clear - it is inappropriate for members to make sexual comments or sexual advances to, or engage in sexual relationships with, staff, whether that person is employed directly by you, the Office of the Speaker, or another caucus. This applies to both male and female legislators.

"It is clear from my discussions that staff view you as their superiors or supervisors, and with that you are in positions of power over them. This dynamic is ripe for potential harassment. I expect each of you to treat staff with respect and keep your relationships strictly professional. If I become aware of any complaints against a member by staff, or another member, I will personally get involved to put an end to it."

Chicago Sun-Times columnist Mark Brown says, "He has a lot of allies and (if) you make a move against the king, you better be ready to take him down, and I don't think there are people that are ready to do that yet," Brown says. Brown recently wrote a piece in which he speculated that Madigan isn't going any where, yet.

"I don't think there's anybody in the House who has that kind of power now, but if they moved as a group of women that changes the dynamic, I think. And, of course, we have an election coming up ... After the primary, this could look a lot different."

In the Democratic primary for governor, it's widely believed Madigan backs multibillionaire J.B Pritzker, though he has not formally endorsed anyone. But if either Kennedy or Biss wins the primary and ultimately the general election, the new governor could be in position to take some sort of leadership role within the party.

Madigan, while he may be unpopular with statewide voters, is a pillar of strength for Illinois Democrats against Gov. Bruce Rauner, Mark Brown says.

And Simpson says it is virtually inconceivable that he would be replaced as speaker before the November election or in January after the new General Assembly is inaugurated, absent new developments. Democratic representatives have had his assistance in terms of campaign funds and volunteer leg work, "so the appetite to get rid of him as speaker at the moment is not high."

Just one Democratic representative voted against Madigan when the speaker's job was last up for election. That was Scott Drury, who'd declared himself a candidate for the speaker post and is now running for attorney general. Drury has called for Madigan's resignation as speaker.

"I simply say relative to Mr. Drury that he's continuing in his practice of supporting the Rauner agenda,'' Madigan said in a press conference last month. "The Rauner agenda is to remove me as the speaker because I've been a strong force against the Rauner radical right agenda so long as I'm the speaker. So for Mr. Drury saying I should step aside, that's the same thing as Rauner (saying) I should step aside, which I don't plan to do."

Pearson says he doesn't foresee Madigan leaving the speaker spot. "Even among the members who don't like the way that this whole issue of sexual harassment has been handled in the political operation, I think even among them you're not really hearing them say that he ought to step down as speaker. I think they're very carefully trying to bifurcate the two, and then refer only to the political apparatus, and not the speakership."

But some believe he's been around too long and it's time for some new blood, Pearson says. "That having been said, there's a comfort level among those members, among the rank-and-file of having Mike Madigan as speaker."

Some lawmakers, including Democratic Rep. Kelly Cassidy of Chicago, have called for an investigation in light of the complaints about the speaker's handling of the harassment cases.

Whether someone needs to be replaced should be determined by the investigation, she says.

"What I've asked for is a truly independent investigation, so someone without any sort of links to our various political communities." The related political and governmental groups go hand-in-hand and there is fluidity between the two, she notes. Policy solutions need to take the fluidity into account "to ensure that that we can truly move on and know that we've made a positive change."

Madigan could argue that there has been legislative action under his leadership in the area of sexual harassment: The General Assembly adopted in November what may have been the first in state-level legislation to come out of the #metoo phenomenon. The new rules prohibited sexual harassment by state officers and employees, mandated training for legislators, staff and lobbyists, and provided a hotline to report inappropriate behavior. Lawmakers also created task forces in the House and Senate, which are now meeting.

"Our office has been available for those that wish to file complaints,'' Madigan told reporters. "Our commitment to everybody is that we're going to continue to do things in a proper manner, and we're going to continue to work with all interested parties to move toward a change in culture around the Capitol building and in the politics of Illinois."

Madigan is trying to stay ahead of the concerns to avoid ouster, but Brown, of the Sun-Times, isn't sure it'll work.

"I think it could take him down. This is where it could happen," he says. "He has a certain way of responding to crises which are sort of taken from the old Richard J. Daley playbook, where you move in and you cut off the wound and you name a committee or a panel to investigate how things could do better and basically you just try to wait for things to blow over. And normally they do, but (because of) this #MeToo movement, these sexual harassment complaints, and … the idea that somehow, he did not handle them forthrightly," the once inconceivable could happen.

"Madigan has already become a liability here over the last four years primarily because of the way the Republicans have made him the issue, and certainly he presents himself as the issue with the problems in his style of leadership and with all the money that's being spent on him," Brown says.

"He probably has more enemies because, as a lot of people that have been champing at the bit for a lot of years, chafing under his sort of autocratic style. There's a lot of people there that that might be willing to step up, but it would take it would take a group to aggressively deal with this problem. I mean that's something that I think has snuck up on him, and it's not easy for him to control," he says.

If Madigan leaves office, however it happens, look for Republican Rep. Margo McDermed of Mokena to push a bill she introduced last year. McDermed's measure would prohibit someone serving as both state party chair and caucus leader.

"We don't necessarily realize that the situation that we're in here, with so much power in the hands of one person, is unique - is not the regular course of business," she says. "So, the point of my bill is just to make people aware of the fact that we don't have to live like this. 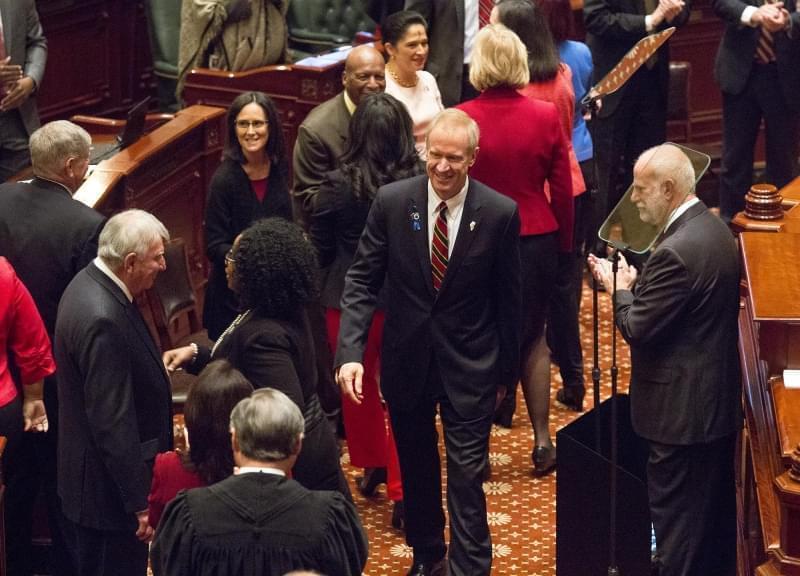