The labels used in American politics to differentiate candidates today are fairly standard: Republican and Democrat. Moderate and radical. Establishment and anti-establishment.

But a new pair of labels is needed to fully consider Illinois' 2018 race for governor: haves and have-nots.

It's true that access to money has always played a major, often decisive role in election outcomes, giving the better-funded candidates superior media, data and staffing that are the lifeblood of most campaigns.

Still, Illinois' contest this year is unusual on the money front, and not just because it's on track to become the most expensive gubernatorial race in U.S. history by the time voters go to the general election polls in November.

For months now, two mega-wealthy candidates - multimillionaire incumbent Republican Gov. Bruce Rauner, and multibillionaire Democrat Jay Robert "J.B." Pritzker - have been sucking the oxygen from the race with tens of millions of dollars from their personal fortunes.

As of late December, with the March 20 primaries still months off, the two of them had put up a combined total of almost $100 million to their own campaigns. And that's in addition to tens of millions more that Rauner has received from others.

At that rate, the two of them could end up in the most expensive gubernatorial race in U.S. history. That record is currently held by California's 2010 election, in which Democrat Jerry Brown beat Republican Meg Whitman after they spent a combined $280 million.

It is "absolutely within the realm of possibility" that a Rauner-Pritzker general election, if that's what it comes down to, will beat California's spending record, Sarah Brune, executive director of the Illinois Campaign for Political Reform, told the St. Louis Post-Dispatch in November.

Rauner and Pritzker both are leading in polls for their respective party nominations, setting up a potential clash of the financial titans in the fall that some warn could severely alter the nature of Illinois politics going forward.

Some in the media are already calling it the "Battle of the Billionaires" (though there remains some debate as to whether Rauner technically qualifies as a billionaire).

Or, in the words of a Chicago Sun-Times online headline in December: "Rich-guy rumble."

"There's a 'wealth primary'" in both parties, says Kent Redfield, professor emeritus of political science at the University of Illinois Springfield. "That's really what we're talking about here. The dynamics have really changed. It's pretty unsettling."

It has already altered the Democratic primary race dramatically. Chicago Ald. Ameya Pawar dropped out in October, declaring the ante too high for his $800,000 war chest.

The handful of remaining candidates - including, of all things, a Kennedy - are struggling to get their messages out while trying to survive an extended game of "moneyball" against two of the richest men in the state.

"[T]he race for Illinois governor will set a record as the costliest race in American history," Pawar predicted in the statement ending his campaign. "For Democracy's sake, I hope we see this as a troubling trend."

Wealthy self-funding novice politicians, for all the attention they get, generally fail.

The Center for Responsive Politics has reported that more than 80 percent of self-funded campaigns nationwide since 2002 have lost their quests for public office to more traditional, experienced candidates. Often, the rich self-funders don't even clear the primaries.

For example, none other than Barack Obama got some unintentional help in his rise to national politics in Illinois' 2004 U.S. Senate race, when not one but two of his wealthy self-funding opponents (Democrat Blair Hull in the primary and Republican Jack Ryan in the general election) self-immolated after spending millions of their own dollars.

Rauner, a venture capitalist whose net worth has been reported at various times at between $500 million and $1 billion, broke that curse of the self-funders in 2014. Showing up with no political resume' but with a fat checkbook, Rauner swamped a field of politically experienced Republicans for the GOP gubernatorial nomination, then beat Democratic Gov. Pat Quinn to win his first term.

Rauner spent more than $27 million of his own money in that campaign and has already committed almost twice that amount toward his re-election bid. From the start of 2016 through late December, Rauner had donated $57 million to his own campaign, records show.

Those deep pockets may be part of the reason Rauner is facing only a single long-shot Republican challenger from his bid for re-nomination, despite a tumultuous first term that has left some in his own party - social conservatives in particular - unhappy with him.

This time, though, there are even deeper pockets on the other side of the field.

Pritzker, a Hyatt Hotels heir with an estimated net worth of $3.4 billion, joined the race for the Democratic nomination in April, announcing up front that he planned to entirely self-fund his campaign. The numbers so far indicate he's serious. As of late December, Pritzker had donated about $42 million to himself and had taken no money from anyone else.

That dwarfs the combined fund raising of Pritzker's two main challengers for the Democratic nomination. Chicago businessman Christopher Kennedy, son of slain U.S. Sen. Robert F. Kennedy and nephew of JFK, had raised about $3.2 million as of late December, with only about $500,000 of that coming from self-donations. State Sen. Daniel Biss of Evanston has raised about $2.4 million since the start of 2016, with no self-funding.

The remainder of the Democratic field is even further down the money ladder.

As of late December, records show, Bob Daiber, Madison County's regional superintendent of schools, had raised just under $90,000, more than half of that from self-donations or loans. Perennial candidate Robert Marshall had given or loaned his own campaign just over $30,000 and reported no other funding. Anti-violence activist Tio Hardiman had donated $5,000 to himself and listed a few hundred dollars in other donations.

Already, the effects of that money differential have been dramatic. As of December, Pritzker had placed more than $15 million in media ads, primarily aimed at introducing himself to the voters. It's worked in textbook fashion, allowing him to leapfrog to the top of Democratic polls over Kennedy, who was formerly the party frontrunner.

Kennedy himself has noted the irony of someone of his lineage being in the position of financial underdog in an election. At a Democratic forum in October, Kennedy quipped that he "thought" he came from a wealthy family before facing Pritzker's campaign. (Pritzker responded, "You do.")

In Pritzker's case, early endorsements from organized labor and other Democrat-affiliated organizations - all underpinned by unofficial but widely known backing from Illinois House Speaker Michael Madigan - have been crucial to his rise.

Kennedy and others have alleged that the decision by labor and party leaders to so quickly line up behind an untested political novice like Pritzker has been driven by his bottomless bank account. Having a self-funding candidate at the top of the ticket, goes the thinking, frees up millions of dollars that the party would otherwise have to spend on the governor's race and allows it to be spent elsewhere.

"It certainly has an impact on the decision making for big labor … because he (Pritzker) can self-fund," said Redfield, the U of I political scientist.

But Redfield says the downside of a wealthy candidate going it alone is that it makes the candidate less accountable than someone who has to cobble together tangible support from various interest groups.

"We like the idea that we've got representative government and people are accountable to someone," says Redfield. "When it's a first-time candidate with big money, they don't learn to compromise."

He cited Rauner as a prime example. "He is basically offended by the political process because he's never had to compromise," which, Redfield argues, has contributed to the current gridlock in Springfield.

Biss, the Democratic state senator, has made the wealth of both Rauner and Pritzker a key campaign theme, to the point of promoting the Twitter hashtag #BissNotBillionaires. Biss says the possibility that Pritzker could win the Democratic nomination and then lose to Rauner because of his political inexperience isn't the only danger.

"Let's say it all works," and Pritzker becomes governor, says Biss. "Then we've set a precedent where the Democratic Party is just going to go out and find a billionaire … for each (future) election. I think it's a very dangerous precedent.

"I understand that Bruce Rauner's bank account is a threatening thing. The solution to that problem is to motivate enough people to build a campaign and then raise enough money to compete," adds Biss. "I don't sense that the people of Illinois want to just hand the office over to the highest bidder. There is some value in having middle class person who understands the struggles of regular people."

Rauner faces an in-party challenge from his right for the Republican nomination: State Rep. Jeanne Ives, a conservative Republican from Wheaton, is campaigning in part on hard-right social stances on abortion, transgender rights and immigration. She has alleged that Rauner has "betrayed our party" on those topics. It's an iffy strategy for a Republican in Illinois, where GOP candidates tend to do best by moving to the middle on social issues, as Rauner has done.

In any case, the financial imbalance could effectively render the ideological fight irrelevant: Rauner's $57 million (so far) in self-funding is up against about $400,000 that Ives had raised as of late December.

Rauner has dismissed Ives as a "fringe" candidate, while focusing his fire across the aisle, on the one person in the race - and one of relatively few in the state - who has more money than he does.

As much as Pritzker's potential nomination could pose a serious monetary challenge for Rauner in the fall, it also provides an ironic opportunity for Rauner to skirt the issue that has dogged him from the beginning: that he's a rich guy who bought his way into office. Pritzker is far richer and - as Rauner has repeatedly pointed out - Pritzker's wealth is inherited, while Rauner's was built in business.

Rauner's "first job was cooking burgers. His second, parking cars … He spent nine months sleeping on a camping mattress because he didn't have any furniture," says the narrator of a digital ad that Rauner put out about himself in May. "But this self-made businessman would go on to earn an MBA from Harvard … and build a reputation as a business pioneer."

Around the same time, Rauner was publicly criticizing Pritzker as "a hotel scion" who is "using his inherited wealth to push for an inherited agenda."

'Only Answer To The Voters'

Pritzker - unable to use the strategy that almost any other Democrat would have available of hitting Rauner for his wealth - is instead employing traditional Democratic tactics, painting Rauner as anti-labor, anti-public-schools and regressive on taxes. Pritzker's campaign also spent about $1 million to inform the public on enrollment options for the Affordable Care Act ("Obamacare") after the Trump Administration cut advertising funding for the program.

"This election is about values and J.B. has spent his life fighting for progressive causes," Pritzker Press Secretary Jordan Abudayyeh said in a written statement. "With Illinois facing big problems, our state needs an independent leader" who will "only answer to the voters."

Kennedy argues that whatever advantage of independence such heavy self-funding might bring, it poses the danger of potentially shutting most citizens out of political leadership. He warns that the massive self -funding trends in both parties could affect "the future of democracy."

"We want to bring back the core values of our country. Part of that dream is that anyone can be an elected official and serve their country," Kennedy says. "What's happening now is alienating a lot of good people from service."

Kevin McDermott is a political writer for the St. Louis Post-Dispatch. 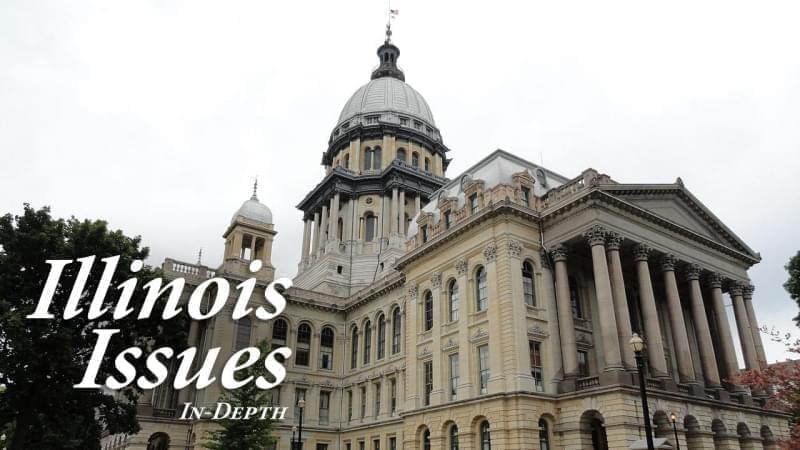 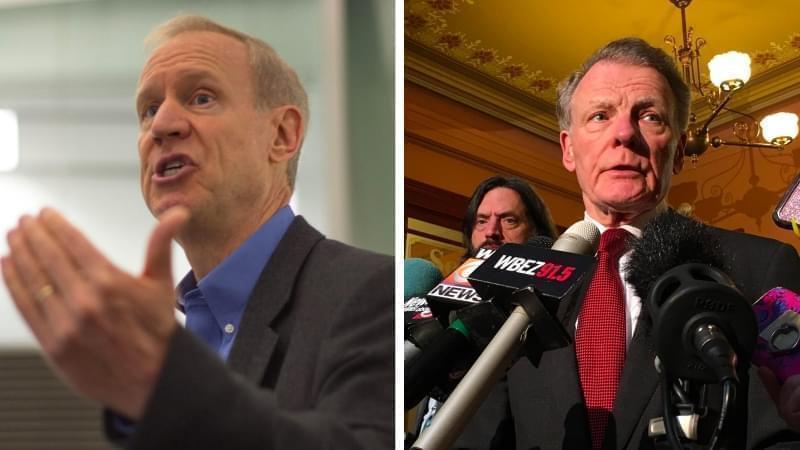