The release of the document also prompted a suburban Chicago alderman mentioned in the warrant, architect Cesar Santoy, to quit the Illinois Tollway board post to which Democratic Gov. J.B. Pritzker appointed him last winter. Santoy left at the urging of Pritzker, who last week had also demanded that Sandoval, a Chicago Democrat, quit his post as chairman of the Transportation Committee.

The unredacted search warrant shows that when authorities scoured Sandoval's home and offices on Sept. 24, they were seeking information related to Santoy and the architectural company he founded, Studio ARQ. Brendan Shiller, Santoy's attorney, said federal officials have told Santoy that neither he nor his company is a target of the investigation.

The Illinois Senate previously released a heavily redacted version of the search warrant from the U.S. attorney's office in Springfield showing that authorities wanted information related to lobbyists and construction companies and employees of the Illinois Department of Transportation. It indicated a search for "items related to any official action taken in exchange for a benefit." Agents hauled out boxes and bags full of computer equipment, cellphones and documents including a campaign-related spreadsheet.

As committee chairman, Sandoval was a key player last spring in legislative approval of Pritzker's $45 billion state construction plan. Sandoval has not been charged with wrongdoing and did not return a call seeking comment Friday on his resignation or the details revealed in the unredacted warrant.

In demanding Sandoval's resignation, Pritzker had noted that the governor's staff clashed repeatedly with Sandoval during construction-plan negotiations. In particular, Sandoval wanted the state to allow recycled asphalt shingles to be used in road construction, which was rejected.

Asphalt contractor Michael Vondra is among the people mentioned in the search warrant. One of his companies, Southwind RAS, based in the Chicago suburb of Bartlett, specializes in recycling asphalt roof shingles. Vondra did not return messages seeking comment.

Relinquishing the committee post means Sandoval forfeits a $10,570 per-year stipend. He will continue to receive his $69,460 legislative salary.

As for Santoy, his attorney said he complied with a government request for "certain communications." Shiller declined to elaborate.

Speaking to reporters in Chicago, Pritzker said Santoy's "very thorough" background check didn't turn up any concerns. But, the governor added, "Corruption and self-dealing are unacceptable and it will be rooted out, whether it's in my administration or in the Legislature."

Exelon had revealed in a federal filing Thursday that it is cooperating with investigators. SafeSpeed, which has red-light enforcement cameras in 30 Chicago-area suburbs, conducts business "ethically and with integrity," spokesman Dennis Culloton said, adding that the company won't tolerate wrongdoing or public corruption.

"The Illinois Democratic Party is a crime ring masquerading as a political party," he said in a written statement. 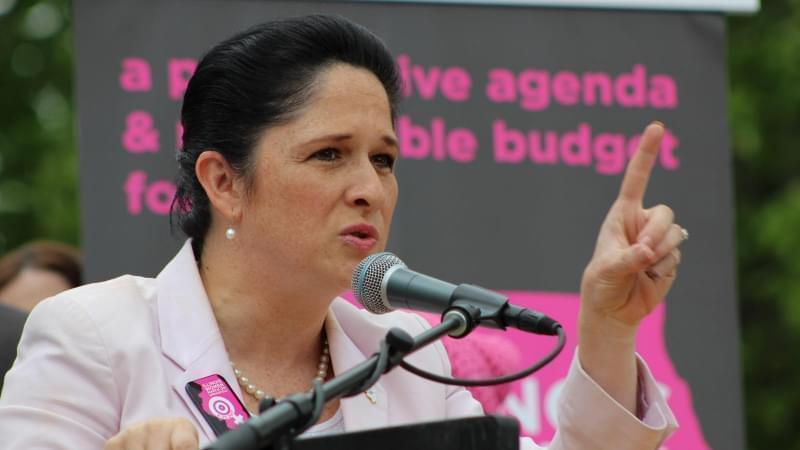 Comptroller To Senator Under Investigation: ‘Step Down’