Inside Out Project Invites Public To Be Photographed For A Cause

The 3-foot-by-5-foot poster-size portraits were made in a mobile photo-booth, featuring people passing by who wanted to show their support for the DREAM Act, a bill in Congress to help young people who are in the country illegally.

The photo installation is called the ‘Inside Out/Dreamers” project. And it will be repeated in several other cities across the country.

At the Champaign installation, Charlotte Lockhart cheerfully entered the photo-booth to get her picture taken. The booth is in the back of  a truck, decorated by the Inside Out Project to resemble a giant camera.

Lockhart is a University of Illinois student and a disabled veteran. She said she supported passage of the DREAM Act, out of her concern from young immigrants in the country illegally who served in the military with the promise of a path to citizenship. That path’s future is uncertain, due to the Trump administration’s move to end the DACA program, which protects many immigrants who were brought to the U-S by their parents.

“Well they served in our military,” said Lockhart. “They decided to forsake their own country, come here, join our military, fight and bleed for our country. And some have actually been maimed in service of America, and said, Go America.”

Joshua Geyer, who came in from New York City to work on the project says it’s a way that individuals can join together to raise awareness about the DREAM Act.

The French artist and photographer known as JR created the “Inside Out” format. While the particular project currently moving through Illinois is in support of the DREAM Act, JR has lent the format to a wide range of topics, from the Black Lives Matter movement to clean air in Flanders, Belgium.

Joshua Geyer, one of the Inside Out Project workers who came in from New York City for the Champaign installation, says the project amplifies the voices of the participants.

“The installations are larger than life, and you can’t miss them,” said Geyer. “If one person has something they want to get out there, it might not be heard.  But this gives them the power to amplify that voice and really stand up for what they’re doing and get all the supporters together that share that dream and vision.

The Inside Out Project/Dreamers will be inviting the public to get their pictures taken for installations at several Illinois sites in the coming days, including downtown Springfield on Oct. 26, the Naperville Art League Gallery in Naperville on Oct. 28, Chicago on Oct. 30, and Batavia on Nov. 1. The project is also going to cities in other cities across the country. In addition, local groups can gather their own photos and send them to the Inside Out Project, to be converted into posters to be shipped back for the group to install. 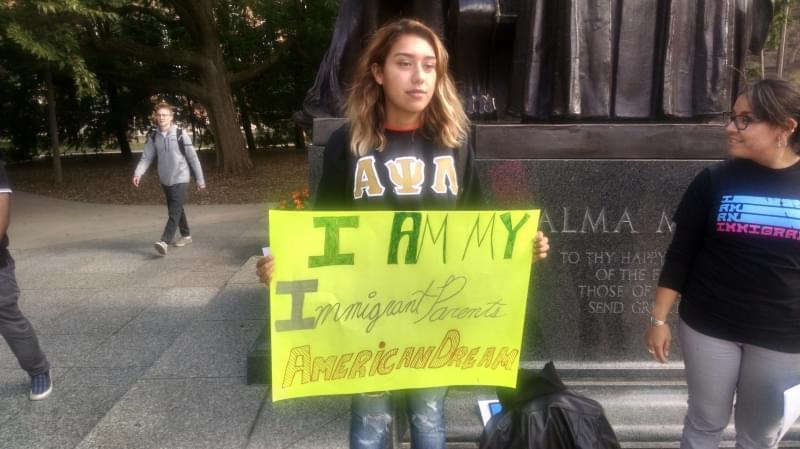