“Mansquito” Headlines Insect Fear Film Festival at U of I

The Insect Fear Film Festival returns to the University of Illinois Saturday, February 28th, with a movie that features the transformation of a prison convict into a half-man, half-mosquito chimera. The scientist whose research on virus-bearing mosquitoes accidentally led to the transformation is struggling to stop the "mansquito", but she has her own problems --- she's turning into a human mosquito, too.

That's the main story in the 2005 SyFy channel movie, "Mansquito" (also known as "Mosquito Man"), which will be shown at the Insect Fear Film Festival this year. And it's par for the course for the festival, which presents cheesy science fiction movies about insects to contrast them with actual insect biology.

Entomology Professor May Berenbaum, who founded the festival, says she was pleased to find a movie that features a woman entomologist at the center of the story. She says it's a story point that comes at a time when the percentage of entomologists who are women is at an all-time high (26%), and when women serve as president and vice-president of the Entomological Society of American for the first time in history.

Berenbaum says the fictional Dr. Jennifer Allen in "Mansquito" also takes a mature view of her work, unlike women scientists in past movies.

But starting in the mid-1990's, movies started to depict female scientists who were motivated by wishes to help humanity.

"There are now female entomologists in the movies who are every bit as capable as their male counterparts of doing experimentation that unleashes giant moswuito-man chimeras on an unsuspecting populace", joked Berenbaum.

As for the science in "Mansquito", Berenbaum sees no possibility of mosquitoes genetically altered by radiation somehow causing humans to turn into half-insect monsters. But she says the film's idea of genetically altering insects to prevent the spread of disease is based on fact.

"There have been genetically altered mosquites that are actually released that have been very effective in combating several mosquito-bourne diseases, including dengue", said Berenbaum. "So it's very plausible."

Besides the movies, the Insect Fear Film Festival also features more factual exhibits about insects, including the always popular Insect Petting Zoo, where visitors can handle real --- and often large --- insects, spiders and other crawling creatures.

"What strikes me every year", said Berenbaum about the Insect Petting Zoo, "is that the kids line up and are incredibly enthusiastic, and the parents shrink back with looks of if not horror, then discomfort".

For Berenbaum, that reaction shows a natural curiosity and interest about insects which many people lose as they grow up, but which she hopes the Insect Fear Film Festival can help prolong into adulthood.

The 32nd Annual Insect Fear Film Festival, presented by the U of I Entomology Graduate Student Association, takes place at Foellinger Auditorium on the Quad at the University of Illinois Urbana campus, Saturday, Feb. 28th. Doors open at 6 PM, with the movies starting around 7:30.Admission is free.

(To hear Jim Meadows' interview with May Berenbaum, go to the "Listen" bar at the top of this page). 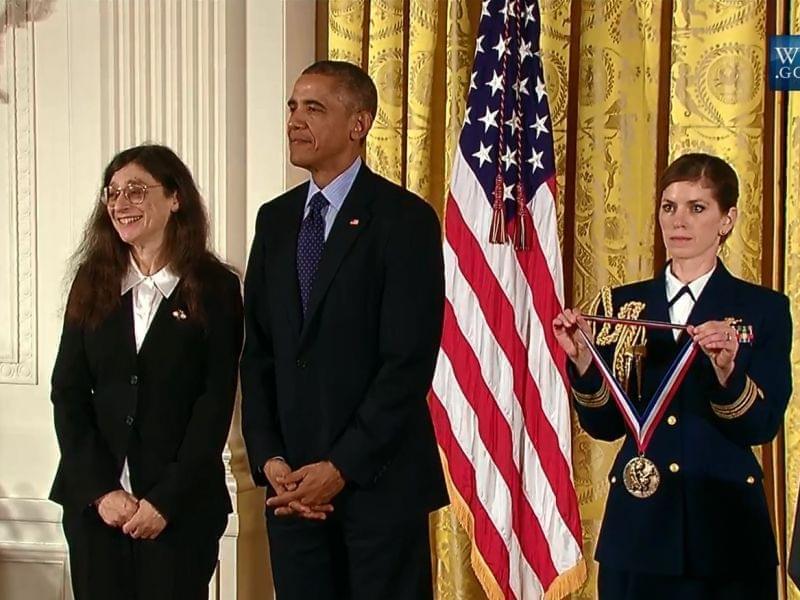 U of I Entomologist Berenbaum Honored At White House

May Berenbaum on entomophagy and giant hornets