The Champaign County village of Savoy has a new village president for the first time since 1989. That's one of many area races decided in Tuesday's Illinois municipal election.

Michael LaDue’s tenure on the Champaign City Council is ending after 32 years.

LaDue, the longest-serving member of the current city council, was defeated in Tuesday’s municipal election by Alicia Beck, 382 votes to 220. Beck, a fitness trainer and former social worker, won 63.46% of the vote in District 2.

Vanna Pianfetti out-polled three rival candidates to win the District 5 city council seat with 52.01% of the vote. Pianfettii works for the non-profit IlliniCloud, which provides tech support for schools. She was helped by an endorsement from Champaign Mayor Deb Feinen. Pianfetti succeeds Paul Faraci, who was elected City of Champaign Township Assessor in an uncontested race.

Incumbents RJ Davis and Steven W. Nichols were re-elected in the two contested races on the Danville City Council Tuesday.

Davis received 51.81% of the vote to defeate Damara Joyner to keep his seat in Ward 3.

Steven W. Nichols was re-elected in Ward 6, with 53.75% of the vote over Aaron Troglia.

Dykstra, who served 15 years on the Savoy Village Board, plus a previous stint on the Champaign County Board, says she looks forward to leading the government for a town that has seen steady growth over the past several year.

"Weve got a lot going for us", said Dykstra, "and I look forward with the trustees and with our staff to pursue those (growth opportunities) aggressively."

Dykstra, a retired teacher, will be working with a Savoy Village Board with two new members. Heather J. Mangian and AJ Ruggieri were elected to the board on Tuesday, along with incumbent Jan Carter Niccum. Trustee Bill Smith lost his bid for re-election.

Charles "Chuck" Smith was elected to a second term as mayor of Rantoul, with 41.3% of the vote in a three-way race.

Smith defeated former mayor Neal Williams (who placed 69 votes behind Smith with 37.6% of the vote) and village trustee Gary Wilson (who received 21% of the vote).

Voters in northern Champaign County's East Bend Township voted 82 to 66 to approve a tax increase for roads and bridges. But the 55% majority in East Bend marked a minority view in the county, where every other tax referendum went down to defeat.

A proposed tax increase for the Crittenden and Pesotum Muli-Township Assessment District was defeated, 218 to 95.

Hensley Township voters rejected a new cemetery tax levy, 103 to 64, and a proposed hike in the existing tax to maintain Civil War cemeteries, 101 to 60.

Roughly three-quarters fo voters casting ballots in both the Bismarck-Henning and Rossville-Alvin school districts approved the arrangement, under which both districts will send board members to a special board to run the high school.

Up to now, the Rossville-Alvin district had been sending the majority of its students to Bismarck-Henning High School, and some to Hoopeston Area High School. But residents had no voice in running either school. With the approval of the co-op high school referendums, Rossville-Alvin will phase out its relationship with the high school in Hoopeston.

School officials say Bismarck-Henning High School will be governed on a cooperative basis starting in the fall of this year. The high school in the Edgar County town of Paris is the only other co-op high school in the state, in which two districts share its governance.

Julie Moore-Wolfe has been re-elected as mayor of Decatur, defeating businessman John Phillips 6111 votes to 5326.

Moore-Wolfe was appointed to the post in August 2015 after the death of Mike McElroy.

Monticello voters have re-elected Larry Stoner as mayor.  Stoner received 614 votes in the three-way race, with 487 for Seth Melton and 182 for Joe Brown.

Stoner was appointed as mayor of Monticello in November 2015, replacing Chris Corrie, who resigned for health reasons.

Board President Dana Trimble was the top vote-getter in voting for Parkland College trustees. Trimble was elected to a fourth term on the community college board, with 18,301 votes. Greg Knott was also re-elected, with 12,496 votes.

But more attention may be paid to the third-place winner, Parkland faculty member Rochelle Harden, who received 11,875 votes. Harden will be the first African-American trustee to be elected since the Parkland College board was first established in 1966.

At the same time, Harden's status as a faculty member has attracted critics who say her employment with the college bars her from serving as a trustee. Harden has disputed the argument.

The three candidates elected to six-year terms beat out three other candidates.

Voters in the Parkland College District also elected Bianca Green over four other candidates to serve out the term of Tom Bennett, who left to serve in the Illinois House.

Daniel Dickey won 69.2% of the vote to win a fourth term as mayor of Gibson City in Ford County.

Carlson defeated Alderman John Carlson by a vote of 555 to 247.

Voters in Douglas County have voted to create a county wide historical museum district. The measure passed by nearly 400 votes, 1754-1361.

The measure enacts a new property tax to fund the Douglas County Museum in Tuscola. But the tax revenue might also be used to fund other museums which have been proposed in the county.

Illinois Public Media's Jim Meadows reported on the push to create the district.

Macon County voters said 'yes' to a quarter-cent sales tax to fund public safety. The final vote was 9,795 in favor to 6,968 against.

Meanwhile, a proposal to make the village of Warrensburg a home rule community was resoundingly defeated, 270-30. 90% of voters cast ballots rejected the idea..

Moultrie County voters rejected a county wide one percent sales tax that would have been designated for school facilities.  "No" votes won by a count of 1851-1309.

Voters in the Cerro Gordo School District in Piatt, Macon and Moutrie Counties approved an $8 million bond issue to pay for improvements to the districts junior/senior high school campus. The vote was 505 "yes" votes to 457 "no" votes. 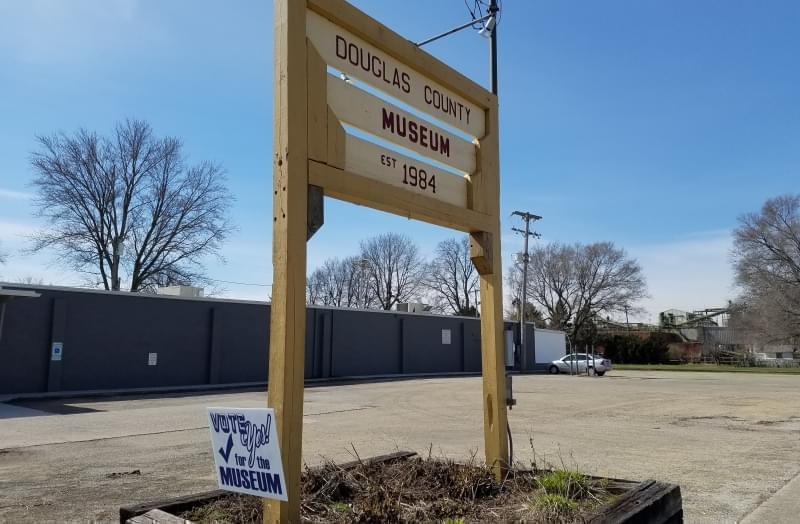