COLUMBUS, Ohio (AP) — No. 8 Ohio State can look ahead to Michigan and trying to find the narrow path back into the playoff hunt.

Coach Urban Meyer this week had refused to talk about the future beyond Saturday's game against Illinois, which ended in a 52-14 blowout by the Buckeyes in sheets of driving rain at Ohio Stadium.

The win, coupled with Wisconsin's victory over Michigan, made Ohio State (9-2, 7-1 Big Ten, CFP No. 9) the Big Ten East champion. If the Buckeyes can beat No. 19 Michigan in the annual rivalry game, and then upset No. 5 Wisconsin, scenarios exist that could see them chosen for the final four, even with two losses.

Unlikely but not impossible.

Barrett, playing in his last game at Ohio Stadium, threw for two touchdowns and ran for another as the Buckeyes dominated from the opening kick.

"Winning in the Big Ten is difficult," said fifth-year senior center Billy Price, who started his school record 52nd straight game. "It's rugged, it's physical. So to come out with everybody healthy, getting the victory, playing pretty well, executing at a high level for an offense, it feels good. We're moving on."

Ohio State's defense limited the Illini (2-9, 0-9) to a season-low 105 yards. They didn't make a first down until near the end of the first half and finished with just five.

Barrett was 11 for 19 for 141 yards, with backups Dwayne Haskins and Joe Burrow playing most of the second half. Running back Mike Weber picked up 108 yards on 11 carries and scored twice, including on a 43-yard breakaway romp in the first quarter.

The Buckeyes led 28-0 after the first quarter and 38-0 at halftime when heavy rain rolled through Columbus, slowing the pace in a messy second half. They had 543 total yards of offense.

"If you stay in coaching long enough, you have games like this where the (other) team is better than you from start to finish," Illinois coach Lovie Smith said.

"They dominated us on both sides of the football," he said. "We had an opportunity early on a third-down play and we got a penalty. It was all downhill from there."

Illinois: The Illini were hapless as a second disappointing season under Smith drags on. With so many true freshmen on the field, the Big Ten's worst team had trouble doing anything against the Buckeyes.

Ohio State: The Buckeyes did what they were supposed to do, piling up points on Senior Day. On to Ann Arbor.

BARRETT'S FAREWELL TO THE 'SHOE

The 22-year-old Texan, who now holds 35 Big Ten and school records, was honored along with 18 other seniors in a ceremony before the game.

"There's a last thing for everything," Barrett said. "With that, I tried to do my best while playing here at Ohio Stadium."

STARTERS GO BACK IN

After Haskins fumbled in the third quarter and Illinois' Ahmari Hayes ran it back for the touchdown, Meyer decided to put his starting offense back in the game as the rain picked up. It was 38-7 at that point.

"I just didn't want it to turn into a clown show, which it looked like for a minute," Meyer said.

"He was very upset," Barrett said. "I saw him. He's known for putting his starters back in so I went to find my (knee) braces and my helmet because I didn't have any of those things."

The backups eventually went back in.

"A video of my mom was up there (on the video board), and I teared up." — Price on the Senior Day ceremony.

Ohio State: Plays at Michigan in the regular-season finale next Saturday. 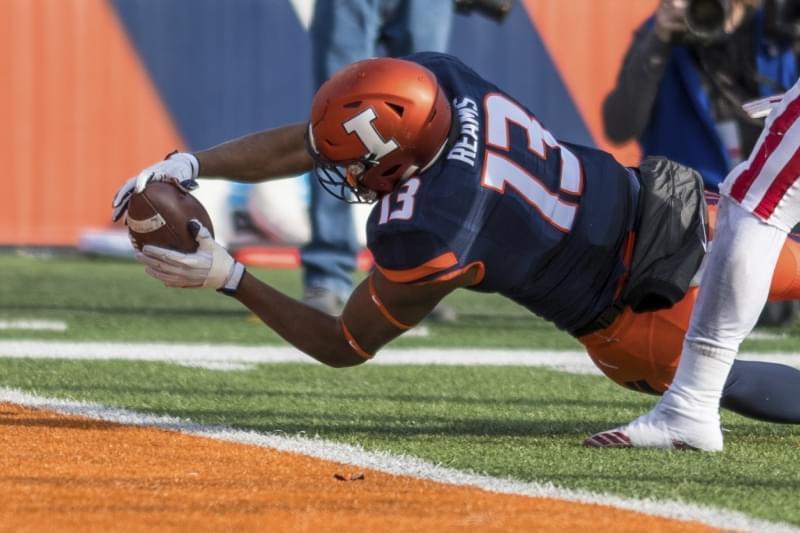