Attendees of the annual Ebertfest film festival in Champaign were treated to a couple of firsts Wednesday -  a 3D film, and a tribute to an actor and filmmaker that critic Roger Ebert admired.

Ramis’ widow, Erica Ramis, said her husband had a knack for finding humor in the toughest of situations - but there was some thought behind his work as well.

“His humor was always layered with intelligence and wisdom sprinkled in, as well as slipping on banana pools and finding candy bars in pools," she said.  "So he was able to bring it all out.”

The moderator of Wednesday’s panel on Ramis, festival host and producer Chaz Ebert, said 'Groundhog Day' grew on her husband over the years, and says it may have been underrated initially. 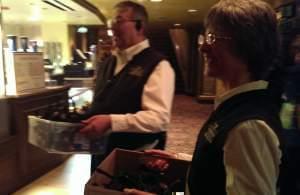 The non-traditional narrative in the 3D ‘Goodbye To Language’ prompted Chaz Ebert to ask the audience, "what did the movie mean?"

She said despite the lack of a standard narrative, Godard knows exactly how he wants scenes to look.

“And he was pointing us exactly the time that we had to do the lines to do the lines – to say the lines – depending on the music in back of us in the movie," she said.  "He was a conductor.  He’s a musician, too, and he’s always directing and editing.  It’s really precise in this way also.”

Projectionist James Bond brought in the projector to screen the film, and donated special 3D glasses different from those used in traditional cinemas today.

The 17th annual Ebertfest marks the third since the passing of Roger Ebert.  The festival continues through Sunday at Champaign’s Virginia Theatre.