Power in Illinois House Speaker Michael Madigan's office has been too centralized and its environment has fostered an atmosphere that condones bullying, intimidation, hazing and long work hours with inconsistent direction, according to an investigative report released Tuesday.

The review by Maggie Hickey, a former state executive inspector general, said Madigan's former chief of staff, Timothy Mapes, had too much authority, serving also as clerk of the House and executive director of the Democratic Party of Illinois. Therefore, the report said, he discouraged complaints while creating a climate in which some staffers constantly believed their jobs were in jeopardy.

Hickey focused on three complaints of sexual harassment or intimidation against Mapes or other Madigan associates in the spring of 2018 as the national #MeToo anti-sexual harassment movement felled powerful men in government, entertainment and the media.

But the 202-page report found bullying and hazing prevalent, including among some state representatives, who described instances when Madigan's staff yelled at members during floor votes or on the campaign trail. New workers were hazed, including unwelcome rough-housing, and some employees thought favoritism was doled out based on clout, race or gender.

"Multiple workers described having been physically intimidated by perceived superiors," the report said. "These situations varied from a perceived superior yelling in someone's face to grabbing or pushing someone."

Hickey was selected to conduct the investigation by a panel consisting of Madigan and eight women Democratic lawmakers.

Madigan, the longest-serving leader of a legislative body in U.S. history, has wrestled with the issue since the fall of 2017. His attempt to answer #MeToo backlash by strengthening investigative procedures backfired as a legislative activist complaining about sexual harassment by a state senator noted that the investigator's job had been vacant for years.

"I take responsibility for not doing enough previously to prevent issues in my office, and continue to believe that we, collectively, need to do more in the Capitol to improve our workplace culture and protect the women and men who work here," Madigan said in a statement Tuesday.

Hickey explained that a 2016 U.S. Equal Employment Opportunity Commission study of workplace harassment identified 12 organizational factors that increased the likelihood of harassment, including offices with "high value" employees, such as elected officials, and significant power disparities. The only one that doesn't apply to the speaker's office involves a workplace where there are cultural or language differences.

"The Capitol is an unconventional workplace that presents challenges in terms of addressing the culture," said Chicago Democratic Rep. Ann Williams, speaking for the committee which selected Hickey. "This is a blueprint for the steps we need to take to make sure the workplace is respectful, safe and healthy for everyone that works there."

Madigan called for the review after a member of his own caucus said Mapes and a colleague tried to intimidate her , another legislative activist ended a deputy House majority leader's career with sexual harassment accusations , and a now-retired House employee accused Mapes of inappropriately sexual comments and bullying.

Hickey's investigation, which included interviews with 100 current and former Madigan employees, elected officials and others who work in or around the Capitol, found sufficient evidence to support only the intimidation allegations against Mapes, which forced his immediate resignation in June 2018.

In a statement issued by a Chicago law firm representing him, Mapes appeared to use his overwhelming responsibility — the focus of Hickey's criticism — as an explanation for his actions.

"The daily needs of my position required constant attention in order to ensure the successful operation of our government," Mapes said. "I have always placed the needs of good government above all other concerns."

Hickey made a series of recommendations for strengthened leadership and accountability, and called on Madigan to become more visible in the management of the office.

She also noted improvements the office has already made, including hiring an equal employment opportunity officer, solidifying investigation procedures, conducting training and implementing an "open door" policy with top administrators. 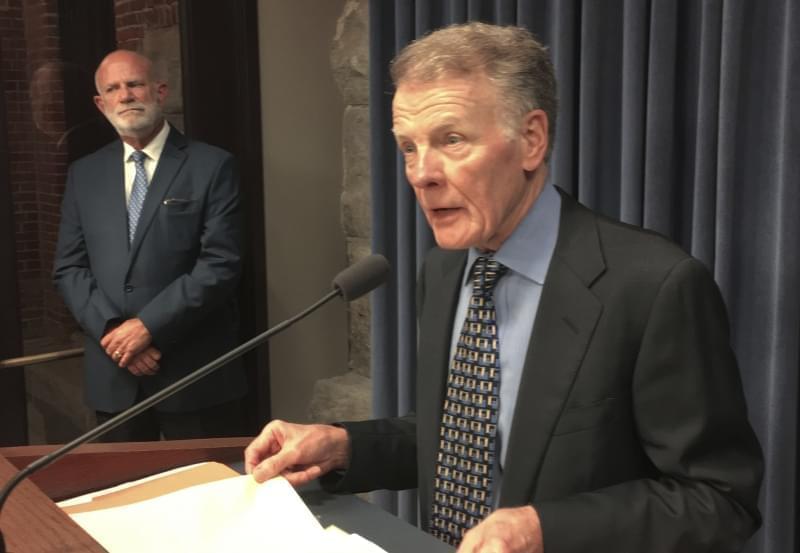