There were dozens of reported tornados on Sunday across the state, including two in Champaign County that hit at almost the same time. Illinois Public Media’s Sean Powers arrived in Gifford just as the skies were clearing, and the cleanup was beginning. Listen to the audio by clicking the button on the left. A small album of photos can be found here.

According to the county’s Emergency Management Facebook page, Spokesman Rick Atterberry said about 200 homes were damaged in Gifford, from minor damage to total destruction.

He said six people were transported from Gifford to area hospitals, and a boil order is in effect in the community until further notice.

In the aftermath of the storm, Rhoda Foster with the Urbana Fire Department spray painted shapes on damaged buildings to indicate the level of risk.

The fire department is one of many from East Central Illinois at the scene Sunday afternoon.

“Stability of roofs, of sidewalls to see if we have any shifting, any structural damage that’s what tells us whether it’s ok to go in or not,” Foster said.

Emergency management officials say 20 homes were completely destroyed, and dozens badly damaged.  This covered at least 10 square blocks, primarily on the north side of town.

A piece of metal dangles from a tree in front of Dave and Rhonda Bletcher’s home.

“Watch for glass and nails,” she said.

“The house is standing, but it’s off the foundation,” said Dave.  “So, it’s totaled.”

Dave is a firefighter in Gifford and also the town’s emergency operations director.

He was at the fire station when the storm hit.  There were a few minor injuries, but no deaths.  Bletcher says people in Gifford had plenty of warning that the storm was approaching.

“We were contacted by county units, and what have you, that there was something coming and we had people actually doing visual,” he said.  “And we saw visual of the tornado, and set the sirens off ahead of time.”

When the tornado hit, Rhonda Bletcher was at home with her two sons and two grandsons.

“When the sirens went off, we went to the basement and the air pressure changed, and our ears started popping, and the windows popped out,” she said.  “Things started flying, and we thought the house was going to come down to us.  It moved and things started falling from upstairs, and we just kept praying, and praying and everybody’s ok and that’s all that matters.”

The Bletchers went to stay at Rhonda’s dad’s house, who also lives in Gifford.  That will be their home for the time being.

But other families don’t know where they’re going to go.  Judith Singh moved to Gifford two months ago.  She was at home with her six children when she came eye-to-eye with the storm.

“The tornado came through our house, literally,” she said.  “We live on West Plummet Street.  It took it completely out.  It was just black, dark.  It sounded like a train.  I heard that before I saw it all.”

But Judith escaped with only scrapes and cuts on her back.  Her children weren’t injured.  Her daughter Autumn said this could have been much worse.

Judith and Autumn sat outside St. Paul’s Lutheran Church, staring at a few boxes of clothing, what they could salvage from their home.  Sobbing, Judith said the tornado took almost everything away.

Residents of Gifford say they’re going to do what they can to help those in need.  Steven Lambaro is the pastor St. Paul’s Lutheran Church, which has opened up as a shelter.

“We’re hooking up as a generator,” he said.  “It’s still in the early stages.  We have some water that’s come in and some other things, too.  So, we’re trying to provide a place right now for people who need to be out of the elements and have no place to go.”

It’s source of comfort for a community shattered, but determined to get back on its feet. 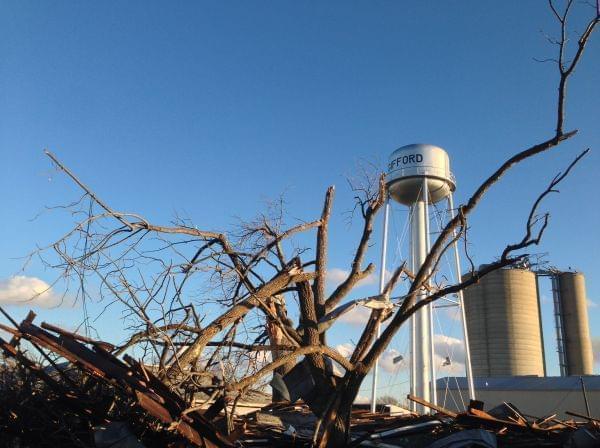