A bond referendum to fund school construction is back on the ballot in the Champaign Unit Four school district this election season. This third version of the proposal is bigger than previous ones. Plus, there’s a big change of address for the most controversial project.

Even many opponents of the referendum have conceded that many Unit Four schools need improvements. The buildings under consideration are all in Champaign, although the district also serves Savoy, Bondville and adjacent rural areas. Many of the district’s school buildings are considered too small or too old, or don’t have the right facilities.

Take, for example, Centennial High School on the west side of Champaign. It was built in the 1960s, and now has portable classrooms set up on the school grounds to relieve overcrowding. And principal Greg Johnson says the rooms they do have don’t fit their current needs.

“We’re down here in the science wing,” said Johnson, as he led me on a tour of the building. “And these classrooms, for the most part, haven’t been updated since 1967. What you want in a science lab is flexible spacing. You know, you want your good science lab areas, you want your classroom experience, and allow students to transition between those two spaces pretty creatively. And we just simply don’t have the space for that right now.”

A renovated and expanded Centennial High School has been part of plans for all three Unit Four bond referendums. Plans for a new building for Dr. Howard Elementary School was added with the second referendum, at the demand of many parents at that school. Parts of Dr. Howard School are over 100 years old. The different sections of the school, multiplied by two stories and a basement, mean students go up and down several sets of stairs and steps to move around the school. Principal Wendy Starwalt says adding elevators to the building has proven unfeasible, making the building unusable for anyone with a disability, student or teacher.

“Even like Grandparents Day, we had grandparents who couldn’t come because they can’t do the stairs,” said Starwalt. “So they had no way to come and eat lunch with their grandchild. In other schools, you know, they’ll have hundreds of people come. We’ll have parents next week who can’t come to parent conferences, because they can’t do the stairs.”

But the real flashpoint for opposition to the referendum appeared to be not which school to rebuild, but where. With the first two bond referendums in 2014 and 2015, Unit Four planned to build a new Champaign Central High School on the north edge of town, nearly three miles from the current building. A grassroots group calling itself “Keep Central Central” sprang up to oppose that idea --- and the 2nd referendum, which was defeated by a wide margin. But “Keep Central Central” is supporting the third version of the referendum on the November 8th ballot. That’s because the school district now plans to leave the high school where it is.

“I’ve never seen such a shift in attitude and transparency and openness, and willingness to discuss the issue, look at all the options,” said “Keep Central Central” member Neil Strack. The local architect referred to what the Unit Four school board did after it gained five new members in last year’s election. The board set up a new facilities planning process with community input from a “Tier Two” committee that reviewed proposals from Unit Four staff. That process came up with a plan to keep Champaign Central High School where it is. The district optioned several adjacent properties that could be used to enlarge the high school campus, making room for an expanded building and the schools first-ever practice fields. The campus will be smaller than the one planned for the north side of town, but fewer students will have to go off-site for athletics than before. And some of those offsite destinations will be upgraded for Champaign Central's use, including the baseball field at nearby Spalding Park, playing fields behind Franklin Middle School and the McKinley Field near South Side Elementary School

South Side, Edison and IPA

“We had spent three-plus months with a group made up of community members recommending $300-million worth of project work”, said Kloeppel, who is one of the five new members elected to the Unit Four School board last year. “And so, taking all that into account really led us to the decision to say, OK, let’s ask the voters if they would support this.”

Unit Four isn’t asking voters to pass a $300-million bond referendum. But it is asking them to pass a $183.4 million one --- 35 to 40 million more than previous proposals. That would add an estimated $280 to the annual tax bill on a $150,000 home, although the increase would likely occur in phases. The proposal has led critics, such as the News-Gazette’s editorial page, to say the Champaign School District is asking voters to pay for too much at once. But Kloeppel says Unit Four would still be charging lower property taxes than most comparable school districts in the region.

“When we add in this $183.4 million to the equation, we leapfrog one district,” said Kloeppel. “We leapfrog Normal, I believe. And all those other districts I just mentioned --- the Bloomingtons, the Decaturs, the Urbanas --- they all are taxing their communities for their schools at a higher rate --- still.”

The Unit Four bond referendum shares the ballot with another tax referendum for facilities --- a sales tax proposal to fund work on the Champaign County Jail and other county infrastructure projects. Keep Central Central’s Neil Strack says if voters say “no” for a third time to the bond referendum, Unit Four officials will just have to go back to the drawing board, because the school district's facility needs aren't going away. 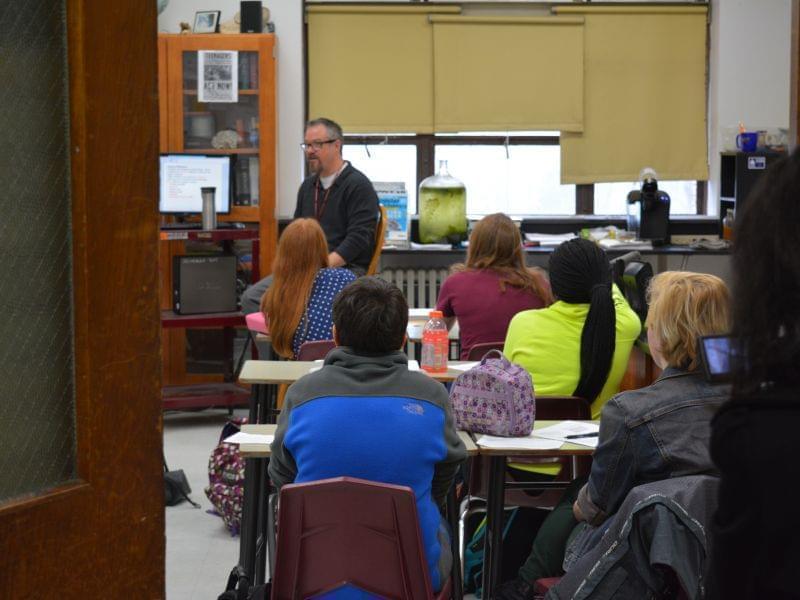