The city of Champaign hopes to reshape the University of Illinois’ Campustown neighborhood - with a more urban feel and more open space, among other changes.  The city also wants to allow developers to design apartment buildings that are "more aesthetically pleasing." One of the ways it aims to do it – by ending a requirement that those developers are required to provide parking.

University of Illinois senior Armani Alejandre is like a lot of students.  He needed a car on campus his sophomore year, to get to a part-time job at Market Place Mall.  His apartment building was required to offer parking, but it was too expensive for him. Instead, he parked his car a few blocks away in a cheaper lot run by the city of Champaign.

Alejandre had to account for the extra time any time he was driving.

"It went from mabye just walking down the steps to my front door, to walking four blocks away, and then having to make sure, especially during the winter time, having to start it up, warm it up, and then, head out," he said.  "You definitely had to plan ahead.”

Developers have argued for years that they were wasting space on parking lots that students like Alejandre weren’t using. That changed under Champaign’s new ordinance that ends parking requirements for apartments.  And the city hopes it helps create a different kind of neighborhood.

“We are trying to become a more urban community, or at least that’s how we envision ourselves in the future," said Champaign Mayor Deb Feinen, who says fewer cars in the neighborhood will help develop Campustown, with more "complete streets" to better accommodate pedestrians, bikes, and buses, even if means students have to leave their cars at home.

“It’s really about improving the density in our high-rise buildings, and understanding that we’re not necessarily a better place if every student brings a car on campus," she said. "And that discouraging that is probably better for our community as a whole, and better for Campustown.”

The city council approved the parking ordinance back in September.

Council member Michael LaDue voted against it, saying more students will end up having to park cars in neighborhoods to the west over the objections of residents.

He also believes that for those who need a vehicle, the difference between storing it elsewhere, or having an option where they live is important.

“So while I see changes in the campus area, the failure to accommodate a different number of lifestyle choices doesn’t strike me as that progressive," he said. "Since (the ordinance) has passed, I wait with some anticipation to see how it will evolve, how it will impact things.”

Before the change in zoning, Champaign’s ordinance required roughly one-half of a parking space per bedroom.

Scott Kunkel is a planner with JSM Development, owner of more than 60 apartment buildings in Campustown.  He says eliminating that parking requirement will give them some flexibility, but JSM has no plans to remove parking altogether.

“The advantage now is that we can have the parking that provides for a project reflect of what the actual demand is for the parking in the market, not what a zoning ordinance prescribes that may or may not be in touch with what the current interest in parking amongst our customers, our residents," he said.

Kunkel says that not having required parking minimums should ultimately benefit the tenant since the cost of having those spaces will no longer have to be recouped in what it charges in rent.

What the city and many developers see as an opportunity, the University of Illinois sees as a threat.

U of I Real Estate Manager Bruce Walden stated his opposition to the ordinance when the Champaign Plan Commission first brought up the end of the parking requirement in August.

He says the measure will drive up the value of land. That would affect what’s called the University of Illinois' Master Plan, which includes plans for new campus buildings.  U of I documents show a number of vacant lots are targets for university development.

Walden told the plan commission that easing the parking requirement would likely drive up competition and make it less likely that the U of I would expand in that area.

“Some of the required areas that we now have allocated for parking pursuant to Champaign zoning ordinance requirements are also designed as future academic buildings in our university master plan," he said. "So a change in the requirements, which essentially frees up these lots for immediate speculation in land development, is of considerable concern to us.”

The city is moving forward despite those concerns.

LeRoy says developers like JSM now have the chance to put up the buildings they want at a reduced cost, and the city is already seeing that happen in the building permits it’s received.

"And without any sort of requirement to make their buildings more personable on the ground floor – to bring units down to the ground floor – they’re doing that anyway," he said. "Because they’re providing only the amount of parking they need. They realize they can provide it typically in the back of the building, take access off an alley. And so the experience walking along the street now – as these new buildings will come in – will feel more urban.”

U of I student Armani Alajandre, who graduates next spring, also happens to be an architecture major. He says the experience of bouncing between apartments – and parking spaces – has helped him think about his career when away from the classroom.

“The architects, I think, get caught up in so many other factors, like design, and how the rooms look, and the space," Alajandre said. "But some of them don’t think about - how are the cable guys going to hook up the cable in this building?  And where are the people going to park?  It’s a simple consideration, but sometimes, it just gets left for last.”

Scott Kunkel expects JSM Development to propose a number of projects with decreased parking in the coming months, now that the ordinance not requiring the space is on Champaign’s books. 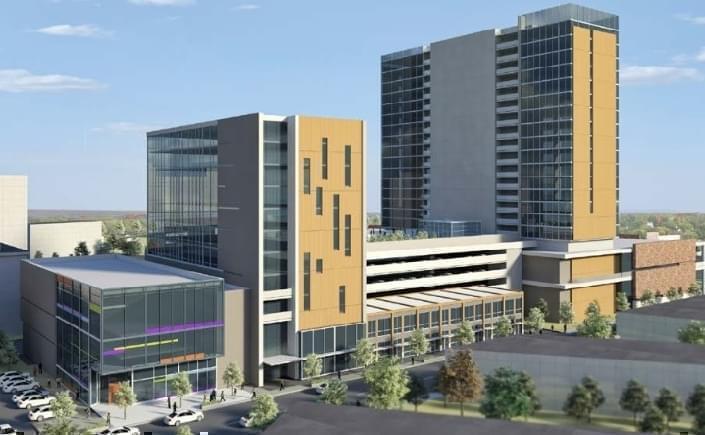