The FBI says the man who opened fire on a group of Republican members of Congress on Wednesday is 66-year-old James T. Hodgkinson of Belleville, Ill., who was shot by police and later died at a hospital.

The alleged shooter expressed fervent opposition to the Republican Party and called for higher taxes on the rich, in statements on social media and letters to a local newspaper. He apparently volunteered for the presidential campaign of Sen. Bernie Sanders, according to the Vermont senator, who condemned the attack.

"This man, whom I don't believe I ever met, had been corresponding with this office for eight years," Durbin said.

He said that his office turned over 16 emails from Hodgkinson to law enforcement. He said that there was nothing alarming in the emails, which covered a variety of constituent issues.

Early on Wednesday, witnesses say, a man armed with a rifle opened fire on a group of Republican members of Congress practicing for a baseball game in Alexandria, Va. Four victims were transferred to the hospital with gunshot injuries: Majority Whip Steve Scalise, R-La., a congressional staffer, a lobbyist and a Capitol Police officer. Another congressman and a second police officer also suffered minor injuries.

Hodgkinson owned a home inspection business in Belleville, Ill., but dissolved the corporation early this year, according to public records.

Sanders said Wednesday that he had been informed that "the alleged shooter at the Republican baseball practice is someone who apparently volunteered on my presidential campaign." The senator said he was "sickened by this despicable act" and condemned it "in the strongest possible terms."

Two now-inaccessible Facebook accounts under the name of James Hodgkinson and purporting to be located in Belleville, Ill., were full of posts supporting Sanders and opposing President Trump.

"Trump is a Traitor. Trump Has Destroyed Our Democracy. It's Time to Destroy Trump & Co.," one of the pages posted in March. That post linked to a petition calling for Trump's impeachment "and or legal removal."

The account called Sanders "a Candidate of a Lifetime" while expressing distrust of Hillary Clinton.

"Make America Great Again, Resign!" the other account posted in June, with a photo of Trump.

The Belleville News-Democrat, a newspaper in his hometown, said Hodgkinson was politically vocal in person, as well as online:

"In 2012, Hodgkinson took part in a protest outside the downtown Belleville post office. He said he was part of a '99%' team drawing attention to the amount of money and political power the top 1 percent of Americans acquired."

Hodgkinson also appears to have written letters to the News-Democrat for several years. A resident by his name wrote repeated letters to the editor, often arguing in favor of raising taxes on the rich.

"We need to vote all Republicans out of office," said a letter in 2011. "Let's work to get this country back."

"This country is in need of a major change in more ways than one, but let's start with the federal income tax rates," said a 2008 letter.

A real estate agent who has worked with Hodgkinson told the News-Democrat that "from a business standpoint, he did not seem like he is a radical — opinionated but not a radical."

"He wasn't obnoxious, he wasn't problematic," Charlene Brennan said. "When he did home inspections for me, he didn't rile up the buyers or make ridiculous statements."

Law enforcement records show that Hodgkinson had been arrested on suspicion of battery and motor vehicle damage, among other arrests.

In 2006, he was arrested for battery after allegedly punching a young woman in the face and striking and choking another individual. In the same incident, he fired a shotgun. Charges in that case were dismissed.

Hodgkinson was still in Illinois as recently as March, when the St. Clair County Sheriff's Department responded to a "shots fired" call and found Hodgkinson shooting a hunting rifle. He had a valid firearms owner identification card, and the deputies advised him to shoot his weapon safely.

But he has been in Northern Virginia since early April, according to The Washington Post. A bar manager at a restaurant in Alexandria told the newspaper that Hodgkinson visited repeatedly and seemed like "not a friendly person" but did not discuss politics or why he was in Alexandria.

The former mayor of Alexandria, Bill Euille, told the Post he had spent the last month and a half talking to Hodgkinson nearly every morning. Euille worked out at the local YMCA (next to the baseball field that was the site of the attack) and realized Hodgkinson, who was showering at the Y every morning, was living out of his gym bag.

Euille, a general contractor, even tried to help Hodgkinson get a job, The Post reports.

After the attack on Wednesday, The St. Louis Post-Dispatch sent a reporter to Hodgkinson's house. Neighbors "indicated the man had been gone from the house for several months," the paper reports. "One said, in reference to the suspect's wife: 'She's got enough problems.' " 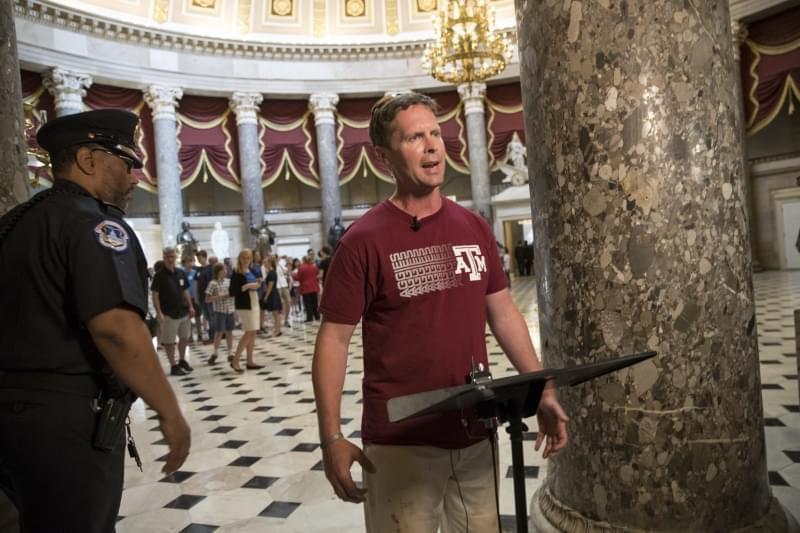