Illinois is in uncharted territory. It'll soon hit its sixth month without a budget.

Republican Gov. Bruce Rauner and the Democrats who dominate the legislature continue to spar about what Illinois' future should look like. Rauner wants to rein in unions; Democrats say that's akin to bolstering business tycoons at the expense of the middle class.

How long can it go on?

Illinois Public Radio's Amanda Vinicky got out her datebook.

If you're someone who reports on government and politics, like I do, there's one question you've asked a lot lately: "When is Illinois going to get a budget?"

It's a question I've posed myself, to people who play a role in the determining the answer -- state lawmakers, like Rep. Elaine Nekritz, a Democrat from Northbrook.

"Everybody wants to know when. So when will this be resolved?" I asked her.

"I have no idea," Nekritz said. "I don't make predictions about when, because I can't figure out what causes a change in circumstances."

Fair enough; Nekritz is one of 177 legislators. She's a politician, not a psychic.

Even so, if you grab your calendar, there are some key dates you may want to circle, to look for a possible change in circumstances.

One of them is coming up: Nov. 30. In order to make it on the ballot, anyone who wants to run for the Illinois House or Senate next year has to have their petitions turned in to state elections officials, certified, and stamped by the end of this month.

"So if I'm an incumbent lawmaker I will know in early December whether or not I'm going to have a challenge in the primary," said Charlie Wheeler, a University of Illinois Springfield professor and a newsman who has been following Illinois politics since 1970. He says the districts legislators run in are often so gerrymandered, that if someone is at risk of losing his or her seat, the primary's often where the real race is, "and so in December, I'll know. And that primary opposition question will be resolved."

Incumbents who learn they won't have a primary challenger may feel more free to take tough votes. And rest assured -- there will be tough votes (on the Turnaround Agenda the governor keeps pushing, plus on tax hikes or budget cuts -- and probably both).

On December, first, Gov. Rauner and the four legislative leaders will finally meet together for the first time since May.

Although expectations are low that much will get accomplished then, let's just say something clicks; pretend -- just imagine -- they reach a deal.

Will Illinois get a budget for Christmas?

Probably not. Keep flipping your calendar. Better yet, bring out a new, 2016 one. When the clock strikes midnight on Dec. 31, and the New Year officially begins, the rules change in Springfield.

For the rest of this year, it takes a supermajority of votes to pass a law that takes effect right away. Come January, that threshold drops; fewer votes are needed. Wait until then, and seven Senators and 11 state representatives are off the hook; their votes aren't needed on those tough bills.

"And so that's why looking at it logically, and based on past history, the earliest that this seems likely to get done is in early January," Wheeler said.

Gov. Bruce Rauner has himself made that point; here's what he said during an appearance in October in Marion: "My sense is they're probably not going to take votes on a budget 'til January. That's my guess. I don't know. It could be sooner, could be later."

Yes. It could be later.

Flip your calendar another month.

Chicago Public Schools' chief says he'll have to send thousands of teachers pink, layoff slips by early February, unless the state fills a nearly $500 million hole in the CPS budget. The city of Chicago's also asking the state to make pension funding changes to the tune of a couple hundred million dollars.

Rauner says the pressure to come to the rescue of Chicago -- the state's largest city, its economic engine, and the city the House Speaker and Senate President both call home -- could bring about a budget deal.

"What I've said to the mayor is: I will help you if you help us. If you help us restructure the state, I will help you," Rauner said of his conversations with Chicago Mayor Rahm Emanuel. "If you will not help us, restructure the state and get reforms that are much needed and very popular with voters, I will not help you and the city of Chicago. That dynamic is going to be a big part of the impetus to get some compromise on both sides."

But here's what Democratic House Speaker Michael Madigan had to say about Rauner, when Madigan was asked earlier this month about when a budget will pass: "If he weren't functioning in the extreme, there could be action today."

The two leaders' statements get to the heart of the dilemma. Months have gone by, and throughout the budget impasse: both sides insist they've compromised, and it's the other guy and his party who has been unwilling to.

Unless that changes, you may have to keep flipping your shiny new 2016 calendar.

-Feb. 17: that's when the governor's to give his next budget speech. It could be that Rauner makes history; presenting a budget proposal for the next fiscal year, even as there isn't a current one in place. By then, political pressure will be even more intense, which could make those tough votes even more difficult, so keep going another month to ...

While you're at it, fast forward to a year from now and pen in this last date:

-Nov. 8: that's the general election. While the state is low on cash, plenty will be spent on the election, as Rauner and his Republicans and Speaker Madigan, Senate President John Cullerton and their fellow Democrats, spending fight moves from the capitol to the airwaves and ballot box. 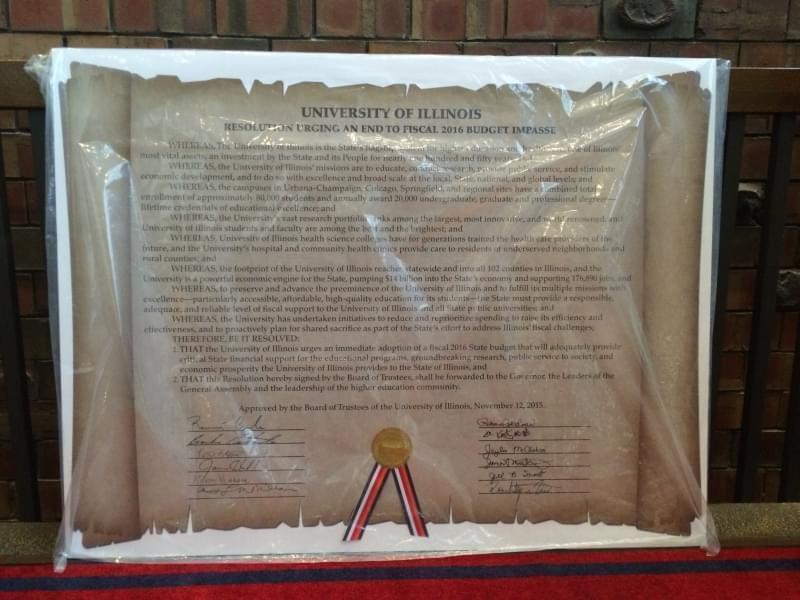 Illinois’ Unconventional Budget-Making Methods (And The One That Seemingly Worked)