Decatur’s Public Works Director says there’s a ‘huge backlog’ of street repairs to be addressed by the city’s new motor fuel tax.  The tax paying for the work took effect last Friday, it’s 5 cents per gallon for unleaded gas, and a penny per gallon of diesel fuel.

The tax was approved by the Decatur City Council in February.

Public Works Director Rick Marley says the work this year alone, like rehabilitation and resurfacing, will total at least $1 million.  But he says overall, there are hundreds of projects totaling in the neighborhood of $20-million.

A third-generation gas station owner admits the tax is a "tough pill to swallow," but believes many have a false impression as to what it’s paying for.

Jay Billingsley, whose family operates two BP stations, says the most heavily traveled routes in Decatur are state roads that won’t benefit from the local tax.

“That’s a little bit of a concern, or I feel, a little bit of a misnomer in our city is that this tax was passed to fix the 'roads,'" he said. "But a lot of the roads – as drivers in our community – we may think, 'hey, why is this road like this?'  Well, it’s a state road, and we all know what condition our state’s in.”

Marley says neighborhood streets are the focus, while other routes are to be paid for by state motor fuel tax funds, although he too notes those amounts have gone down over the years.

Marley says the city will provide updates on the city’s work on line.

“We will have progress reports," he said. "We will show the dollar amounts for the various street improvements – we’ll have photographs of before, during, and after that will be updated on a regular basis.”

Marley says that research should be on the web within a couple months, and help residents understand which street projects are funded with the local tax.

Billingsley says some people may purposely seek out cheaper gas outside of town, but adds he has many loyal customers.  He calls gas an anomaly, unlike another frequent purchase, like milk, which people buy without taking the same notice of the price going up or down.

A recent check on the pricing website Gas Buddy dot.com shows regular unleaded in Decatur is currently hovering around $1.85 a gallon, similar to the price now in Champaign-Urbana. Mount Zion, near Decatur, has prices ranging from $1.77 to $1.89. 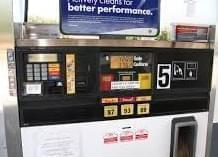 Gasoline Prices Go Up & Down But Mainly Down: Analyst