Illinois residents get one last chance Thursday night to speak out in a public forum about new rules on fracking in the state.

These regulations are in response to legislation signed over the summer to regulate high-volume, horizontal hydraulic fracturing. It is a process that involves pumping large amounts of chemicals and water deep underground to release oil or natural gas.

A public forum hosted by the Illinois Department of Natural Resources got underway this week at the Decatur Civic Center in Macon County. Hundreds of people from all over the state showed up to make their case against fracking.

Just before the meeting started Braze Smith, an organic farmer in Southern Illinois, sung Christmas carols re-written to oppose fracking. He was joined by members of Illinois People’s Action, a group calling for a moratorium on fracking:

“There ain’t no freaking frackin’ in this town. When they come and start to drilling, it’s not us that they’re killing. We’ll frollick and play when we run them away, living in a fracked up wonderland,”

Moments later, the meeting started, and the arguments against fracking piled up  - one man complained about the amount of water used, another listed the harmful health effects of chemicals involved in the fracking process, still another demanded tougher penalties against companies that violate fracking rules.

Braze Smith stepped up to the microphone, and said he worries about another potential side effect – earthquakes.

“You guys are going to punch holes in one of the most seismic hot spots, areas in the country,” Smith said. “That’s like Bugs Bunny when he comes up to that big red button that says do not push, that’s DNR walking up to it and pushing it.”

Bob Bauer with the Illinois State Geological Survey said there is no direct connection between fracking and earthquakes. He said earthquakes have been linked to wastewater disposal, which is the water that comes up after the hydraulic fracturing process. He said Illinois’ recent fracking law signed over the summer specifically addresses seismic activity.

“There are guidelines if earthquakes are felt, reducing pressures for the fluid that’s going underground,” Bauer said. “So, there’s a thing called a traffic light, which goes from green to yellow to red that dictate felt events, and what has to be done associated with those different scenarios.”

The Natural Resources Defense Council, an environmental group, does not want to see fracking in Illinois, but it acknowledges that it’s here to stay and supports the state’s regulatory law.

Ann Alexander, a senior attorney with the group, said some of the rules outlined by the Illinois Department of Natural Resources undercut protections in the bill. For example, she said the drafted regulations do a good job requiring companies to store fracking wastewater in tanks, rather than open pits that can leak. But there might be a loophole.

“There was a provision for emergency situations where there was an overflow and you can put it in a pit, but that was only supposed to be used in an emergency,” Alexander said. “The way the department drafted the regulations makes it much easier for drillers to potentially use the quote unquote emergency storage pit routinely.”

The proposed rules require oil and gas companies to inspect water quality, and hold them accountable if there’s contamination. These are proposals Alexander said do not go far enough. She also said local communities should have a say over how fracking happens in the state.

“There may be some communities who are not satisfied with the 500 foot setback from schools that’s required in the law, and they may very reasonably want a thousand foot setback or a 1,500 foot setback,” Alexander said. “We think they should be able to do that.”

But the Illinois Chamber of Commerce said allowing communities to hold hearings on fracking could be expensive for the state and turn off some drilling companies, a potential loss of thousands of jobs and billions of dollars.

“We did a study with Illinois State University about a year ago,” explained Tom Wolf, the Executive Director of the Chamber of Commerce's Energy Council. “They came back with a range of a thousand jobs over five years to 45,000 jobs over five years, and the reason for that huge range is no one knows exactly how much oil or gas will come out of the shale play in Illinois, and how economically they can get it out of the ground.”

One of the companies paying close attention to Illinois’ new rules on fracking is Colorado-based Strata-X Energy. It has begun the process of Horizontal Hydraulic Fracturing in Clay County in south central Illinois.

Right now, that project is small enough that new rules for high volume fracking would not apply, but the company still has to follow other oil and gas drilling regulations in the state. But President and CEO Tim Hoops said the company could ramp up operations.

“If the regulations get so onerous, we can’t make the same sort of return that we could in North Dakota where we got a fabulous player and down in Texas where we also have an outstanding play, we’ll redeploy capital,” Hoops said. “Even though we’ve spent probably close to $10 million dollars already in Illinois, if it becomes too onerous we’ll move elsewhere and Illinois will suffer from it.”

Back at the public forum in Decatur, Braze Smith, the organic farmer, said there is more at stake here than jobs and money.

“(The Department of Natural Resource) and the government in general, you have been provided with an impossible task,” Smith said. “That task is to make this process safe. If you look at the science – what’s happening all over in Romania, Pennsylvania, and New York, and Texas - there is no safe for fracking.”

Strata-X Energy and other companies are going to have to wait on final regulations.

Illinois Department of Natural Resources spokesman Tim Schweizer said he has received about 2,500 comments on the proposed rules. He said the department will submit its final draft to a legislative committee for approval, but there is still time to comment.

“It’s very likely that there will be changes in the proposed regulations before they’re finally implemented,” Schweizer said. “That happens all the time in the formation of state regulations, and we expect it will in this.”

The final public forum on Illinois’ rules for fracking is Thursday night in Carbondale, but anyone can comment on the Illinois Department of Natural Resources’ website until Jan. 3. 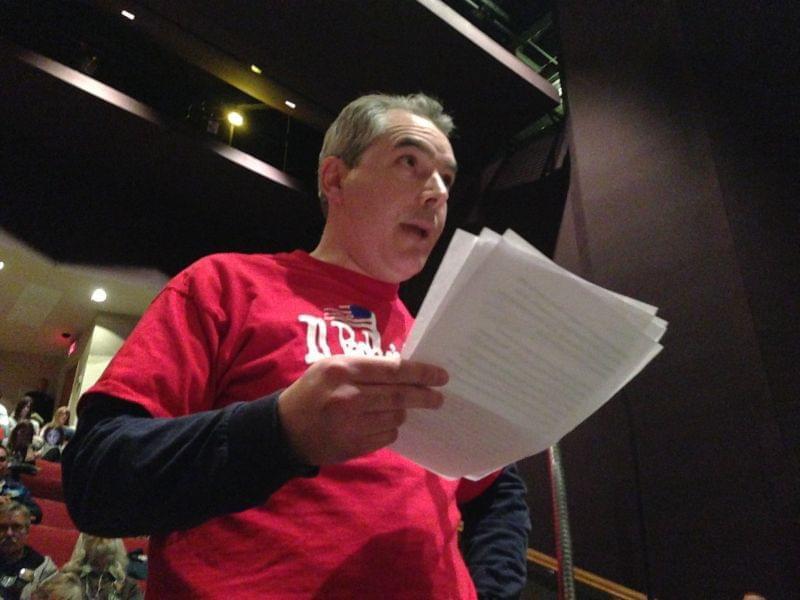