End Of The Line: The Southern Illinois Towns Where The Dakota Access Pipeline Ends

Brian Stover raises chickens at his house in rural Marion County, Illinois, just across the road from the Patoka Tank Farm where the controversial Dakota Access Pipeline ends — about 75 miles east of St. Louis.

Stover, 54, likes living out here in the country on U.S. Highway 51, between the tiny villages of Vernon and Patoka. He sells his eggs — including speckled ones from Easter Egger hens — for $2 a dozen. A hand-lettered sign on his back porch welcomes customers to his home:

Where the tea is Sweet

& Our Faith is Strong

Stover’s white frame house is surrounded by farmland. His closest neighbor is the tank farm, a sprawling complex of enormous white steel tanks that are nearly 4 stories tall. Each can hold upwards of a quarter of a million gallons of crude oil.

“We’re kind of isolated out here. It’s country, but it’s not. It’s a little bit of both,’’ Stover said, cheerfully. “I have chickens, and they enjoy living next to the tank farm and laying them eggs. And I have a prosperous little business selling them here on 51.’’

Business had been good on this grey winter day. By early afternoon, he’d already sold out of eggs.

The Patoka Tank Farm is the end of the line for the Dakota Access Pipeline, some 1,172 miles from its starting point in the Bakken/Three Forks oil field of North Dakota. Somewhere, on the other side of tall security fences, that infamous pipeline will join a busy underground hub.

Crude oil already flows into the tank farm through the Keystone, Enbridge and Capline pipelines. There, it’s stored in tanks owned by major oil companies, including Marathon, BP and Exxon/Mobil. The oil leaves through outgoing pipes that transport it north and east to about a dozen refineries in Illinois, Ohio, and West Virginia. One pipeline heads west, to the Phillips 66 facility in Wood River.

The $3.8 million Dakota Access Pipeline that’s being constructed by Energy Transfer Partners has been in the headlines for months. Thousands of demonstrators joined with the Standing Rock Sioux to protest the location of the pipeline in North Dakota. In September, a small group protested at the tank farm.

But Stover has seen few demonstrators. He says the tank farm has been a good neighbor.

“We’re aware that these tanks are over there with crude oil and whatnot and it doesn’t bother us any,’’ he said. “I’m quite sure that our government in the greatest country in the world — the United States of America — looks out for the security there. I know they maintain it well. You’re always seeing security folks.’’

Stover has little interaction with the tank farm workers, but at Christmas, they bring over a gift basket.

“They ask us if we’ve seen anything suspicious or if we’ve smelled anything that we shouldn’t, and they give us their phone number so we can keep them posted if anything looks out of place,” he said.

Stover doesn’t mind the bright security lights that shine through his windows at night. Or, the heavy trucks that rumble past on their way to the tank farm.

“I have a hammock between the two trees there in the backyard, and I’ll go out and just contemplate and think and talk to God and just enjoy it,’’ he said. “Sometimes, with the traffic noise, it can almost lull you to sleep.”

“It’s just been there my whole life’’

The Sioux argued that the location of the Dakota Access Pipeline violated treaties with the federal government and would threaten their water supply. Shortly after taking office, President Donald Trump signed an executive order that lifted a previous order by former President Barack Obama that had called for a review by the Army Corps of Engineers. Construction in North Dakota resumed last week.

In Illinois, where the pipeline crosses nearly 180 miles and 12 counties, construction was met with little opposition, though Illinois conservationists have expressed environmental concerns. A report by the nonprofit Prairie Rivers Network, for example, found that the pipeline crosses under more than 50 rivers, big and small, in the state and could put the water supplies of nearby towns at risk should there be a spill.

But residents say the Patoka Tank Farm is as much a part of their local landscape as the grain farms that grow corn, wheat and milo. Most know little about what goes on there — or how long it’s been there.

“It’s just been there my whole life,’’ said Brandi Meyer, 32, the village treasurer of Patoka. “It has grown since I was a child. But I’ve always known it to be there. You drove by it everyday, and there it was.”

The tank farm has a Patoka address, but it’s located on unincorporated land about three miles north of the village.

The village, founded as a railroad town in 1854, has a population of about 560, according to the U.S. Census. Everyone knows everyone. Residents stop by village hall to pay their water bills — and to bring Meyer gifts and food because she’s going to have twins.

Residents support the Patoka High School sports teams — there are Warrior Nation signs everywhere. Country singer Drew Baldridge, a rising star in Nashville, was one of 17 graduates in the Class of 2010. He filmed a video in town a few years ago.

“You need to look into Drew Baldridge because he’s up and coming,’’ said Mayor Betty Brumfield. “He’s rocking it, I’m telling you.’’

But it’s the tank farm that’s kept Patoka on the map.

“It’s just a part of our community. It’s an asset, and there’s local people employed there,’’ said Brumfield, 58, who once worked there cleaning tanks.

Although Patoka doesn’t directly benefit from tank farm tax revenue, she said the school district does. And the oil companies and their employees contribute time and money to community projects.

Once construction is complete, tank farms operate with small workforces. So, many Patoka residents commute to jobs in larger nearby towns, like Vandalia, Salem or Centralia. And that’s where they do their shopping, as well.

Like many small rural towns, Patoka has lost population and businesses in recent years, Brumfield said.

ADM has a grain elevator in the village. There’s also a bank, a post office and a gas station.

An exception is Foltz Welding, a Patoka business that began in the 1990s. Foltz is a pipeline contractor that builds pump stations and does maintenance work for various pipeline companies.

The company works all over the country, but it does not lay pipeline cross-country, said Jeff Lauritzen, operations manager at Foltz.

He said his company has built a large portion of the tank farm.

“We build the pipes, all the meter stations, the pump stations and all the piping to the tanks. We don’t build the tanks themselves,’’ he said.

Foltz keeps about 50 or 60 people employed, he said, adding that his company employed over 400 people last year, when seasonal and temporary construction workers are included.

“It is a big economy booster for around here,’’ he said.

Lauritzen has worked at Foltz for 10 years, but even he’s not sure why the tank farm is located near Patoka.

“Most of your tank farm terminals will end up in a very remote rural area,’’ he said. “The biggest one is in Cushing, Oklahoma, and it’s out in the middle of nowhere, as well.’’

Tank farms help move the volume of oil that Americans use in products ranging from gasoline to hair products, Lauritzen said.

But why is it here?

People expect to see lots of farmland in Illinois, so the tank farm is a striking sight, even on a Google satellite map.

From the air, the 60 or so tanks look like white buttons on a crazy quilt of corn and soybean fields.

The tank farm has expanded in recent years, and it’s hard to get a sense of scale when driving past the tanks that are visible from U.S. 51.

According to Genscape, a company that monitors oil inventories, Patoka has a storage capacity of more than 18 million barrels.

During World War II, the federal government divided the nation into five Petroleum Administration for Defense Districts, or PADDs. Patoka is the second-largest oil storage site in PADD 2; the largest is Cushing.

So, why is the tank farm located here?

Well, it helps to know that a century ago, oil was king in Marion County.

In January 1938, oil was discovered on the Glenn Merryman farm, a half-mile south of Patoka. Soon there were derricks all over the countryside, and by the end of the year, Illinois was producing 7.5 million barrels of oil.

At age 86, Harold Boyles of Salem seems to be one of the few people who remembers when there wasn’t a large tank farm in Patoka. Boyles, who’s the president of the Marion County Genealogical Society, believes the oil terminal began small — as a collection point by oil companies — and grew as more companies located next to one another.

“See, those people producing oil in Marion County, what would they do with their oil? They sold it to Mobil Oil and piped it up to the tank farm and then they shipped it here, there and yonder to places that manufactured oil and gas,’’ Boyles said.

Jim Watson of the Illinois Petroleum Council says that geography had a lot to do with it.

“Illinois is at the crossroads of the nation for lots of things. If you look at rail in the city of Chicago, it’s a similar situation with the pipelines,’’ he said. “It’s part of the superhighway of pipelines. You have a major tank farm and switching point in Cushing, Oklahoma. Then you have the one in Patoka. Patoka generally sends stuff south and east, while Cushing goes toward the Gulf.”

Watson notes that Illinois is the fourth-largest refining state in the nation. He believes that, because oil was being produced in Marion County, there was already a storage footprint there, and from there the tank farm grew.

The Patoka Tank farm is basically in Vicky Treffert’s backyard.

Treffert lives in Vernon, where the population was 129 in the 2010 census.

“It’s a quiet little community. Lots of grain farming. Your soybeans. Your corn. Some milo. And the oil tank farm south of the park here,” she said. “It’s been here for a very, very long time.’’

Treffert’s house is next door to G.A.R. park, which was established in 1915 to honor local Civil War veterans who belonged to the Grand Army of the Republic. The little park has a life-size statue of a Union Army soldier, playground equipment and picnic benches.

From her back door, Treffert has an unobstructed view of the storage tanks, about a half-mile away. She’s used to the lights at night and the security vehicles.

After all, this isn’t the first pipeline that’s come through here, she pointed out.

“It’s not that we’re blind to it,’’ Treffert said. “It doesn’t phase us. People around here, we just sort of stick to ourselves. We don’t want to disturb anybody. We’re neighborly — we don’t get up in arms about it.” 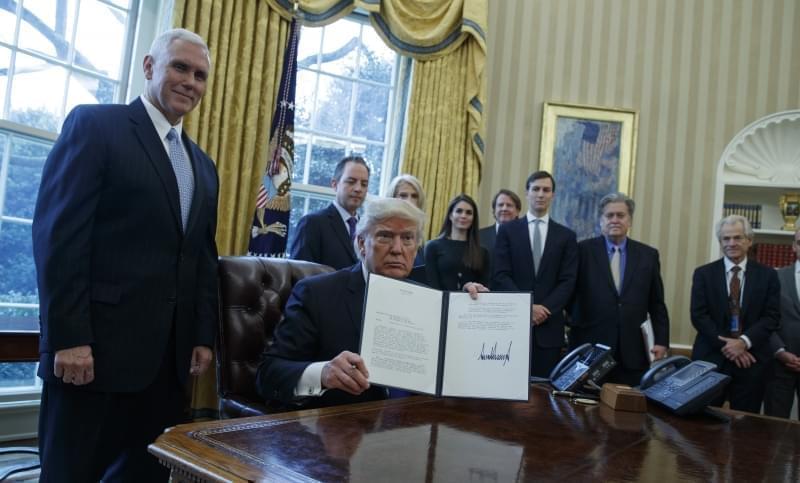 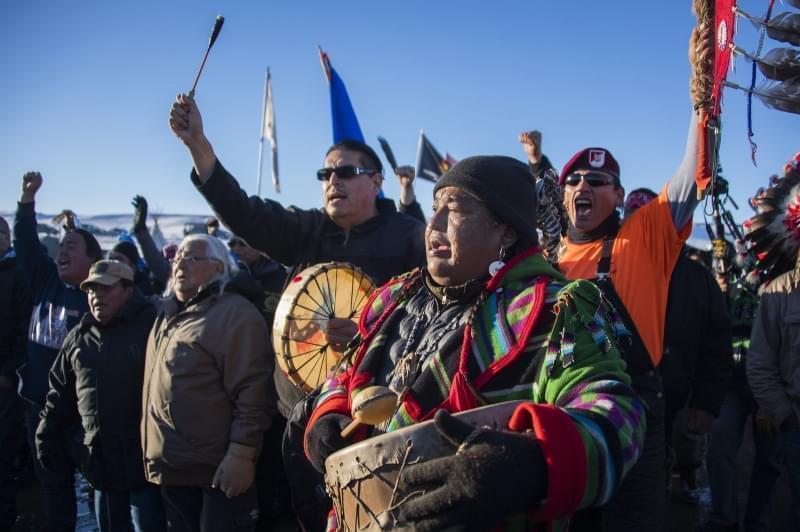 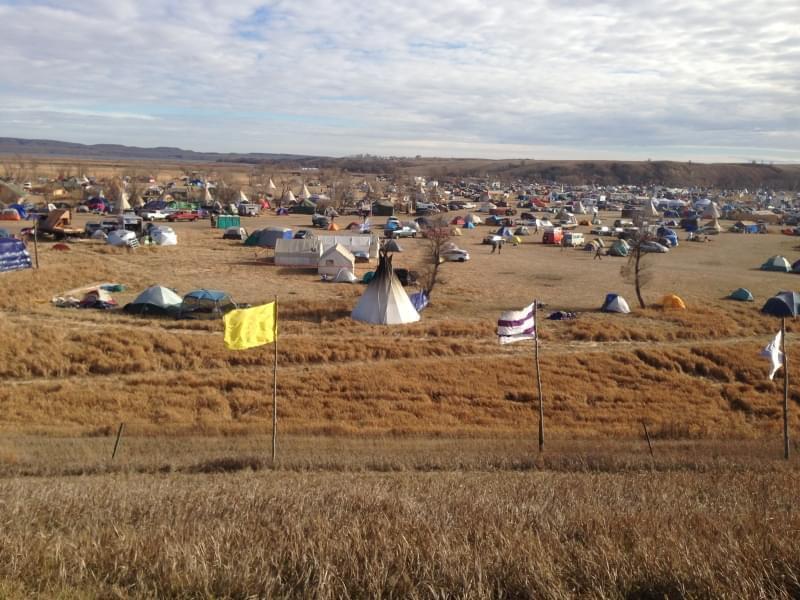 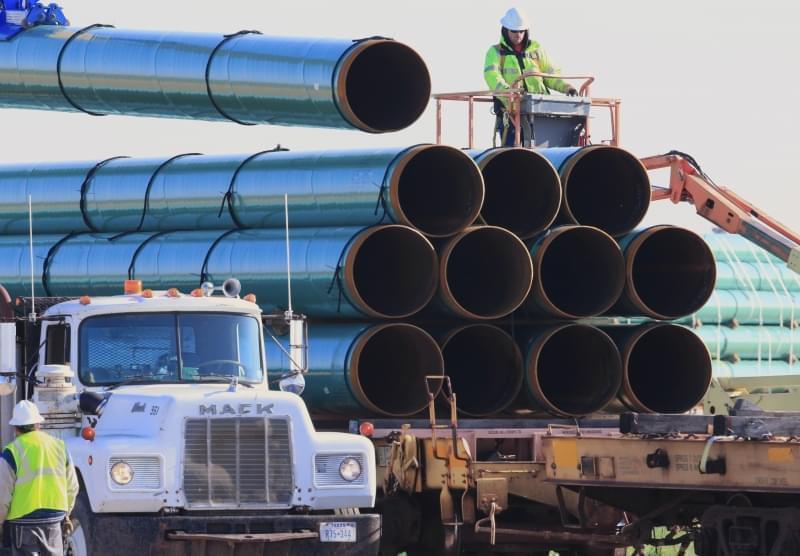