After a rough Big Ten Tournament, the Illinois baseball team returned to form Friday night with a 10-3 defeat of Ohio in its first-ever home NCAA regional.

The Illini scored a total of 9 runs in the Big Ten Tournament, making a series of costly errors, and saw their 27-game win streak come to an end.

Illinois may be ready to start a new one after Friday’s dominant win over the Bobcats at Illinois Field.  They trailed early, 2-1, but a 5-run 2nd inning, capped by a 3-run David Kerian homer – which may have been aided by the wind, wiped out that deficit.  But he wasn’t the only one hitting.

“It’s just good to see balls fall today," Kerian said.  "Everybody was swinging well – hits up and down the lineup in key situations.”

Reid Roper also homered for the Illini. Reid, his brother Ryne, and Will Krug all had two hits apiece.

The Illini also got a 9-inning performance out of pitcher Kevin Duchene, allowing the team to save other arms for the rest of the weekend.  He allowed 3 runs on 7 hits, throwing 114 pitches.  After a 10-minute rain delay, the breeze went away in the third inning.  But Duchene said there were bigger factors at play.

“We have the best hitters in the nation," he said.  "When we play defense, you see what we’re able to do. I wouldn’t say that the wind was as big of an equalizer as you think, I think it was more the mentality of the team to come out and get this regional started off on the right foot.”

Coach Dan Hartleb says his hitters are confident in their ability to rally.

“If you look back, there’s probably a third of the games this year where we’ve been behind after one or two innings," he said.  "And we – just answer the bell.  There’s no panic in this group at all.  It’s complete composure.  They stay loose.  They’re very focused.”

A sellout crowd of about 3,400 fans saw the Illini’s 48th win of the year -  one shy of the school record for season victories, set in 1982. Illinois is now four wins from its first College World Series.

Illinois moves on to play Notre Dame, which was scheduled for 7 p.m. Saturday, but was postponed by rain to 3 p.m. Sunday.  Earlier Friday, Notre Dame beat Wright State, who was leading Ohio 5-2 in the third inning Saturday when that game was delayed by rain.  It resumes at 11 a.m. Sunday. 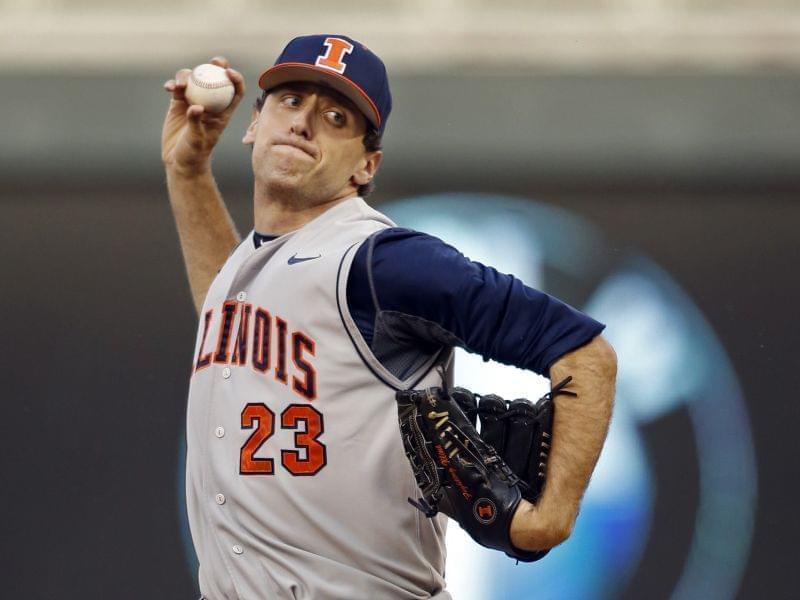