A new state law makes naloxone, a drug that counteracts opioid overdoses, easier to get. But is a drug that treats overdoses but not the underlying addiction enough?

Northlake resident Steve Kamenicky is lucky to be alive.

He’s 58 years old and says he’s used heroin for 46 years, starting at age 12. He has overdosed several times and nearly died, but he survived because of the medication naloxone hydrochloride, also known by the brand name Narcan.

Kamenicky can be seen in a YouTube video overdosing on heroin in 2008 and being saved by the medication.

“From what I understand, I was the first person ever documented actually overdosing and being brought back with naloxone,” he says.

The opioid antagonist was approved by the U.S. Food and Drug Administration in 1971, but it’s gained attention in recent years as the country’s opioid epidemic has exploded. According to the Centers for Disease Control and Prevention, heroin-related overdose deaths increased by more than 280 percent between 2002 and 2012.

In 2014, 10,574 people died of heroin-related overdose deaths in the United States, including more than 700 people in Illinois, according to the Illinois Department of Public Health.

Last year, Illinois passed a comprehensive law, the Heroin Crisis Act, with a key provision that will expand access to naloxone. Passage of the law drew praise from advocates, politicians and medical providers. But some point out that even though naloxone saves lives, it won’t cure addiction. There are limited publicly funded treatment options and a lack of doctors in the state who can give medication-assisted treatment. In other words, the new law may help people live but not necessarily get healthier, and the continuing budget impasse isn’t helping matters.

The new law will make naloxone more available in several ways. It allows pharmacists to give out the medication to anyone who comes looking for it, and it’s covered under Medicaid. The act allows schools nurses to administer naloxone to students.

It also requires that state and local agencies employing law enforcement officers or firefighters be equipped to administer naloxone. Many paramedics and fire departments in the state already use it. The new law applies to corrections officers, court security officers, county security officers and conservation police officers with the Illinois Department of Natural Resources.

Naloxone can instantly revive someone who has overdosed on heroin or another opioid because it stops the drug’s effects temporarily in the brain. Naloxone comes in different forms, including a single dose injection using a syringe, nasal spray and an auto injector. It can be injected into the muscles and works immediately on the brain. The auto injector is the most expensive to purchase but the easiest to use.

There are signs when someone is overdosing on heroin or another opioid. Victims’ lips can turn blue from lack of oxygen. They lose consciousness and don’t respond to physical pain. In an overdose, the brain stops sending messages to the body to breathe, leading to death.

“[Naloxone] pulls the opioid off the opioid receptors,” says activist Chelsea Laliberte. “Blocks it from interaction for 30 to 90 minutes, and you’re able to breath again.” Laliberte and Kathleen Kane-Willis, director of Roosevelt University’s Illinois Consortium on Drug Policy, spent years advocating for the General Assembly to pass a law that would help tackle the state’s heroin epidemic.

Kamenicky says he started carrying Naloxone around the year 2000. He says he’s used it  to save the lives of nearly 100 overdose victims. Before he had it, he would try CPR on overdose victims, but not everyone could be revived.

Kamenicky gets his Naloxone for free through the Chicago Recovery Alliance. Its director, Dan Bigg, says they give out more than 100,000 doses of Naloxone every year. But every year, it seems to get more expensive to purchase the medication. In 1996, the cost was less than 20 cents a dose. Biggs says the cheapest he can find now is $15 a dose. Without state funding, he says the organization can’t expand services to those who need it. “We are leaner and meaner than we have ever been,” he says.

Naloxone works on prescription opioid overdoses, too. Many people who become heroin addicts start off abusing prescription pain pills. Opioids can kill pain and produce a high. Opioids kill pain by mimicking endorphins, a feel-good brain chemical that is released when people feel pain or stress. Opioids can also produce pleasure or euphoria because the drug activates the reward center of the brain, releasing dopamine. It’s the same chemical the brain releases when a person eats or has sex, but in amounts many times larger. People are motivated to continue taking drugs to keep getting that feeling, causing addiction. Eventually, they become sick without the drug and experience flu-like symptoms.

DuPage County Coroner Richard Jorgensen says heroin on the streets today is much purer than in previous years. In 2013, 46 people died of opioid overdoses there. That number dropped in 2014 after outfitting police officers with Naloxone. But deaths rose last year because heroin spiked with fentanyl, which is an opioid that is many times stronger than heroin, caused overdoses.

Naloxone can reverse fentanyl overdoses, but it may require multiple doses.

The news that musician Prince died of a fentanyl overdose in April has drawn worldwide attention to the drug. Pain doctor Michael Rock says he’s particularly concerned about the amount of fentanyl floating around and fears even more deaths. “I think that we started to pay more attention to the heroin epidemic when fentanyl started to become something they cut the heroin with,” Rock says.

The Chicago Tribune reported last fall that heroin suspected of being laced with fentanyl caused nearly 74 overdoses in 72 hours. Major fentanyl outbreaks that affected the Chicago area were also reported in 2005 and 2007. Kamenicky says his wife Pam gave him Naloxone when he overdosed on heroin laced with fentanyl.

Kamenicky and others struggling with addiction will overdose time and again and continue to use opioids, but almost dying does lead some to seek immediate treatment. For people who are low-income and addicted, finding help in Illinois can be challenging. There are limited publicly funded treatment options, a lack of doctors in the state who can give medication-assisted treatment. Those seeking help sometimes spend months on a waiting list.

llinois has drastically cut funding for substance abuse treatment in recent years. A 2015 study authored by Roosevelt University’s Illinois Consortium on Drug Policy says that as of 2012, Illinois had the third worst capacity for state-funded treatment in the nation. Kane-Willis says the state is probably now the worst in the nation because of the unprecedented budget impasse.

Laliberte says she has seen the effects of budget cuts firsthand. “I work with hundreds of people who cannot get treatment, who have gotten treatment, but can’t get the appropriate level of treatment and who have overdosed because they can’t get it,” Laliberte said in November after the legislation became law. Laliberte’s brother Alex died in 2008 of a heroin overdose. “When you’re in it, you see the destruction. And I’m in it, definitely.”

Kane-Willis says the most effective kind of treatment is medication-assisted treatment, which uses drugs like methadone and buprenorphine to help calm cravings. They act as substitutes in the brain by acting on the opioid receptors. Both treatments are highly regulated.

The Heroin Crisis Act, which took effect last September, removes a lifetime limit of only covering buprenorphine treatment for a year. Despite the law requiring the state’s Medicaid program to cover methadone treatment, a spokesman from the Illinois Department of Healthcare and Family Services (IDHFS) says they’re not sure when methadone will be available through Medicaid.

“Methadone is not available through Medicaid for medical-assisted treatment of opioid addiction at this point,” department spokesman John Hoffman says. “Any future availability for [medication-assisted treatment] has not been decided on.”

Republican Gov. Bruce Rauner, used his veto pen to remove the Medicaid coverage requirement after the Heroin Crisis Act reached his desk, but lawmakers later voted to override his changes. The governor wrote in his veto message: “The State’s Medicaid programs already cover multiple forms of medication necessary to treat alcohol and opioid dependence. But without adequate funding to support mandated coverage for all forms of treatment, regardless of cost, this change would add to the State’s deficit.”

Hoffman says the state expects to spend $267 million to implement the law in fiscal year 2017. However, Rep. Lou Lang, who sponsored the bill,  disputes that number. He says having Medicaid cover such addiction services would save an estimated total of $57 million a year in court costs, hospital charges and the Illinois Department of Corrections Budget. Lang, a Skokie Democrat, says IDHFS has indicated to him that coverage is expected to start January 1.

Kane-Willis says the Stop Overdose Illinois coalition, made up of activists and community groups, would consider suing the state if methadone isn’t covered under Medicaid next year. “Knowing that these are the most effective drugs to treat opioid use disorders,” she says. “If people on Medicaid … (would) not be able to access the most effective forms of treatment, then you’re going to have many more negative outcomes, including death.”

ABOVE: The CDC's recommendations for addressing the heroin epidemic nationwide.

She says the state doesn’t have enough buprenorphine doctors to treat patients. Out of 102 counties, Illinois has 59 counties with no providers and 16 counties with only one provider. There are several methadone clinics in the Chicago area, and in cities such as Peoria, Springfield and East St. Louis. Kane-Willis says there are waiting lists for beds in state funded treatment centers. “We don’t have enough providers in the state. But, it’s hard to attract providers in the state when the state is in kind of a mess,” she says, referring to the budget impasse.

Lang says the expanded Medicaid coverage is the most important part of the measure, but he says he knew that it would take time for the state to put the entire law into place. “I can’t say yet that I’m dissatisfied, but I also can’t say yet that I’m elated,” he says. “We just need to take this farther down the road.”

Kamenicky says the past several months have been rough. He and his wife Pam were homeless for eight years before getting an apartment. Life greatly improved last winter when the couple got on methadone and stayed clean for a few months. He bought a TV. He had money in his pocket.

But both started using heroin again after taking in a homeless friend who was still using. This March, Pam got an infection from injecting heroin and died.

These days the Northlake resident says he spends his days looking for heroin — not so much to get high, but to ward off withdrawal symptoms. He misses his wife, who now won’t be there to administer Naloxone if he gets another bag of heroin laced with fentanyl and overdoses.

“Having this addiction right now is a still a result of that,” he says, referring to picking up heroin again after their attempt to get clean. “My wife would probably still be alive today if it wasn’t for that. More than likely, she’d be right here next to me.” 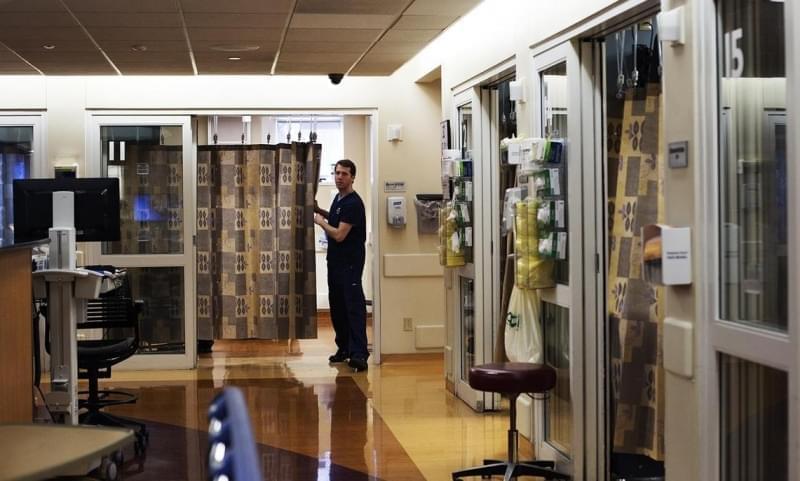 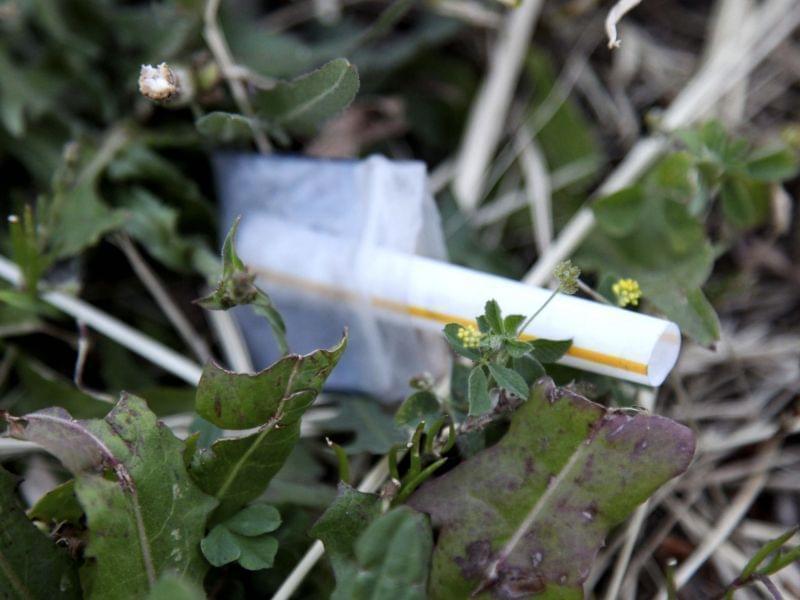