This week, Gov. Pat Quinn gave a keynote speech at a forum in Washington, D.C. on natural disasters. The governor says Illinois has suffered a record-number of incidents in recent years, and yet the state has come up short when it's sought help from the federal government.

In January, the Federal Emergency Management Agency sent a letter to Illinois emergency officials denying public reimbursement for November tornado clean-up costs. That denial includes  the towns of Washington, Gifford, and others that are still recovering.

FEMA denied the state’s request last month, saying Illinois was more than 11-million-dollars short of the threshold to qualify for the public assistance.

Jonathon Monken, the head of Illinois' Emergency Management Agency, has a question: "How do you really compare human suffering?"

Monken admits it is a trick question.

"What's the worst disaster to ever impact anyone in the United States?" he said. "It's the one that destroyed my house."

Not his, house, per se, but Monken is trying to underline that the worst disaster is the one that impacts you. Whether it's the flash flooding along the Mississippi River in 2011 or the tornadoes that wreaked havoc throughout central Illinois in November.

"So the hard part is, what you don't want to do is get into a situation where you're actually trying to compare human suffering," Monken said.

In a way, that is exactly what the Federal Emergency Management Agency does. When a disaster hits, a disaster big enough communities believe they can't pay for its aftermath for alone, they join with the state to request assistance from FEMA. FEMA has to decide if it will grant that help.

To make that determination, the agency relies mostly on a formula. There are a lot of factors, but a big one is if a state meets a per capita theshold. Basically, FEMA figures a state can chip in $1.36 per resident. Which means Illinois needs to rack up $17.8 million worth of damage to qualify for aid.

As the fifth most populous state in the U.S., that means the threshold Illinois needs to meet to qualify for assistance -- $17.8 million of damage -- is the fifth highest.

"In very general terms, that means that in the eyes of the federal government, Illinois has the fifth most resources as a state to be able to help local communities recover from these types of disasters," Monken said.

Never mind that Illinois is struggling financially, and no matter where in Illinois the disaster hits.

Racking up that amount of damage would be easy, say, if a tornado hit a heavily populated area, like Chicago; not so much if a tornado touches down in a small town.

"So it bascially means that barring some apolyptic level event within a small community, it's almost impossible to have a small community disaster in Illinois that gets to the threshold for federal assistance," Monken said.

That is why observers say FEMA turned down Illinois' request for public assistance following the November tornadoes, which left eight people dead and destroyed 2,500 homes, including more than a thousand in Washington, just outside Peoria.

"Get in and I'll show ya what we're faced with" said Washington Mayor Gary Manier.

"All the homes are gone. Came in, and cleaned up," he said, driving through what was once a subdivision. Block after block, it's empty - like nothing was ever there. There are a few clues of what was there before the storm, like an overflowing dumpster and a brick fireplace that is alone in the middle of an open field.

"There's another foundation ... sad. It just breaks my heart," Manier said, pointing out he and his wife's first home.

The way Mayor Manier sees it, Washington and other downstate communities are punished by FEMA, because they're in the same state as Chicago. Manier has nothing against Chicago -- on the contrary, he's thankful for all of the help the city has given. And FEMA too, for that matter. Nearly immediately after the tornado hit, FEMA was on the ground, helping.

The federal government has spent $26 million in direct, private assistance, which is huge for survivors. That means grants or loans to help residents who lost their homes pay for an apartment or clothes, or to help a small business make repairs.

But FEMA's denial of public assistance means Washington will not get money to pay for damages to community property -- torn-up streets, tons of debris removal. The tab is more than half the city's annual budget.

"I've never seen such extensive tornado damage, and to believe that this does not qualify under some federal formula is just hard to understand," says U.S. Sen. Dick Durbin (D-Ill.). "Had this occured in a more sparesely populated state, a rural state. There's no doubt that FEMA under its formula would have made the payment."

Durbin and U.S. Sen. Mark Kirk (R-Ill.) want FEMA to change the formula. There is also a bipartisan effort in the U.S. House from Illinois' Congressional delegation.

"We think there should be more emphasis on the local assessable tax base," Durbin said. "Take a look at the median income of the people that live in the area. The poverty rate as well. So zero in on the area affected rather than looking at averages for a state as large as Illinois."

FEMA won't comment on pending legislation, but it's not the first time Durbin has tried for that change. In 2012, FEMA denied both private and public assistance to Illinois after a tornado struck Harrisburg, in southern Illinois -- but Durbin's attempt at a fix never advanced.

"We didn't follow through, you know, you don't think it's ever going to happen again," Durbin said. "And it just did. So now we have to be more systematic. We have to take a look at the FEMA determinations and see how many other states and communities have gone through this experience."

So far, nobody outside of Illinois has signed onto either of the new versions. Durbin's office said he is looking to find sponsors from states in similar positions to Illinois. Texas and Ohio may be options.

In the meantime, Illinois is appealing its denial for the November tornadoes -- the revised application says the damage across nine counties topped $21 million — surpassing the $17.8 million state threshold.

FEMA will only say the preliminary request was denied because it determined the state and local governments were capable of handling recovery efforts. The agency said the appeal is under review. 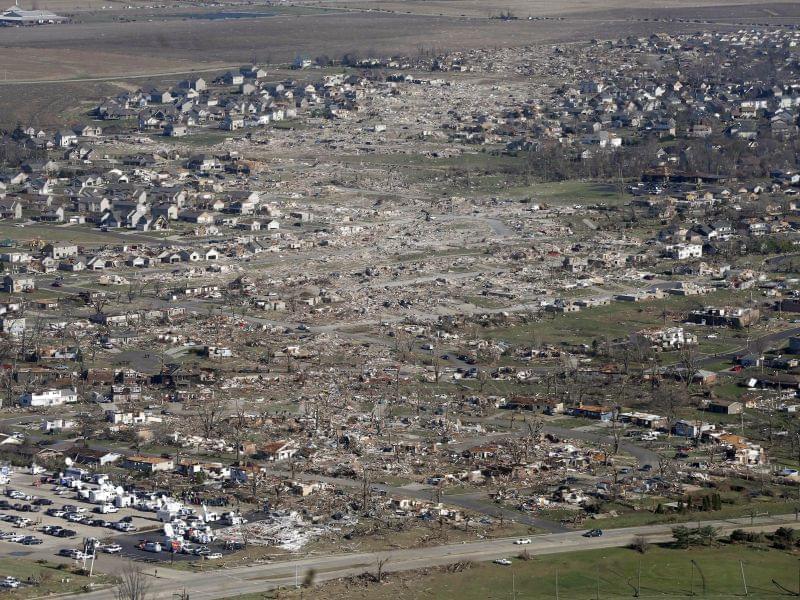 Washington Mayor To Attend State Of The Union Address

Tornado Victims Have Week To Apply For SBA, FEMA Assistance