Chris Miller is the Republican candidate for state representative in the 110th Illinois House District, which runs from Charleston and Mattoon in Coles County, down to Robinson in Crawford County and Lawrenceville in Lawrence County

Miller is running against Democrat Shirley Bell of Mattoon. The incumbent, Republican Reggie Phillips of Charleston, is stepping down after two terms in office.

The 64-year-old Miller is a third generation farmer who raises Angus cattle, and lives in his hometown of Oakland, about 20 miles northeast of Charleston. He writes on his campaign website that he’s running for the Illinois House because the state is in serious trouble.

At an October 16 candidate forum in Charleston, (sponsored by the Mattoon and Charleston Area Chambers of Commerce) Miller said his farming experience gives him a solid background for addressing that trouble.

“It's a natural offshoot of what I've been doing for the past 40 years,” said Miller. “We've been solving problems and fixing things that are broken. A lot of time in farming you spend negotiating. And I know that one thing that I can prove that I'm a good negotiator was I convinced Mary (his wife of 37 years, who accompanied him at the forum) to marry me, and move from Naperville to Oakland, Illinois.”

Miller said Illinois government is weighed down by a backlog of unpaid bills and a mounting pension debt. But he argued that the problem for the state isn’t a lack of revenue, but too much spending.

“I know that in our household budget we know how much money we're going to bring in,” said Miller. “And so because we know how much money we're bringing in we know how much money that we can spend. And it's important to not spend more than what you take in because if you do then you have a mess. And part of the problem we have now is that we've had the blue model of leadership since Richard Nixon was in the White House. And Michael Madigan and the mafia has been in charge, and all they know how to do is tax, borrow and spend. Tax, borrow and spend is the blue model. It's been a failure it will continue to be a failure. And if we don't change things then all we will do is continue the spiral downward that we are on.”

That’s not the only time during the candidate forum in Charleston that Miller blamed House Speaker Madigan for the state’s problems. It also came up when he was asked about what should have been done to avoid the budget impasse that left state government without a spending plan for nearly two years.

“This issue lies at the feet of Mike Madigan and the corrupt Chicago politicians,” said Miller. “Because one of the reasons why they couldn't come to a consensus on the budget was number one, MIke Madigan never brought a budget, in order to try to make Governor Rauner look bad. It was pure politics. And the second reason is that they were trying to funnel money to Chicago. And I know that as far as downstate Illinois and District 110 that our schools need funded , our roads need funded, and there's a multiplicity of things that need to be done and where money needs to be spent. And when all we're going to try to do is send money to bail out issues that we created ourselves, it’ not working.

When it comes to the state’s underfunded pension programs, Miller shared the viewpoint of many Republicans.

“Well I think one thing we do is, we need to honor our past promises”, said Miller. “We need to move our new hires into a 401(k) type of retirement system. And I also think that we also need to respect the taxpayers when we're addressing all those different issues.”

“I know the other day that my daughter Evangeline and I were talking about the idea of a progressive income tax,” said Miller. “And she looked at me and say, ‘Dad don't we already have a progressive income tax?  You know, if you make a hundred thousand you pay more than the guy that's making twenty thousand’.  And I said, ‘Well, I think you may be onto something there’. Whenever a Democrat talks about progressive income tax or tax reform, it's code language for, ‘we want to raise your taxes, and we're going to figure out some way to do that’. And so we need to be careful when we talk about this. Another thing about a progressive income tax is, I have never heard of anybody including J.B. “Bahama” Pritkzer defining the terms of what that means. … We need to find out all the details and then make an intelligent decision.”

Pritzker has also said that a vehicle mileage tax is worth looking into as an alternative to the motor fuel tax, which is collecting less revenue due to more fuel efficient vehicles. Miller said he rejects the mileage tax as an option, said that it ties in to the main concerns he’s hearing from voters on the campaign trail.

“I would not support the mileage tax”, Miller told his candidate forum audience. “There is one thing that I've observed over time with the General Assembly is that they have been completely irresponsible with the money that they have taken from the tax payers. And I see no reason to give them any more tax dollars at this point.

“Another thing that I've done over the past 16 months”, Miller continued, “is I've tried to go up and down the district on a listening tour, because I'm going to be their representative, and I want to know their cares and concerns. There were four things that was a common denominator that linked all the constituents together. They wanted to fire Mike Madigan and the machine Mafia that has controlled Springfield since Richard Nixon has been in office. The second thing that they asked for was tax relief. So I think that I would be betraying my constituents if I asked them to pay extra on a gas tax. Another thing was term limits and fair mapping. And the last name was promoting a positive job culture here in the state of Illinois. So now, I would not vote for an additional tax on gas.”

Miller was reserved when asked whether he supported more state funding for education.

But Miller was less reserved when asked about the value of Eastern Illinois University to the 110th House District, and what he would do to help it. Eastern Illinois University in Charleston suffered from budget cuts and drops in enrollment due to the state budget impasse, although enrollment recovered somewhat this fall. Miller said he understood Eastern’s importance.

“I know one thing I know about EIU is it's one of the largest economic drivers in our area,” said Miller. “It’s kind of the lifeblood of the economy here. And I know that with my leadership along with the help of Max Coffey, who’s on the Higher Ed Board, and Chapin Rose and Dale Righter, that we can do an excellent and effective and efficient job of educating the next generation. And I look forward to working with those men as well as others and receiving your input to make EIU’s recovery full, and for them to prosper abundantly in the future.

State Higher Education Board member Max Coffey is a Charleston businessman and former state legislator. He and the two current state senators Miller mentioned, Chapin Rose of Mahomet and Dale Righter of Mattoon, are all Republicans.

The 110th Illinois House District runs from Charleston and Mattoon in Coles County, down to Robinson in Crawford County and Lawrenceville in Lawrence County. 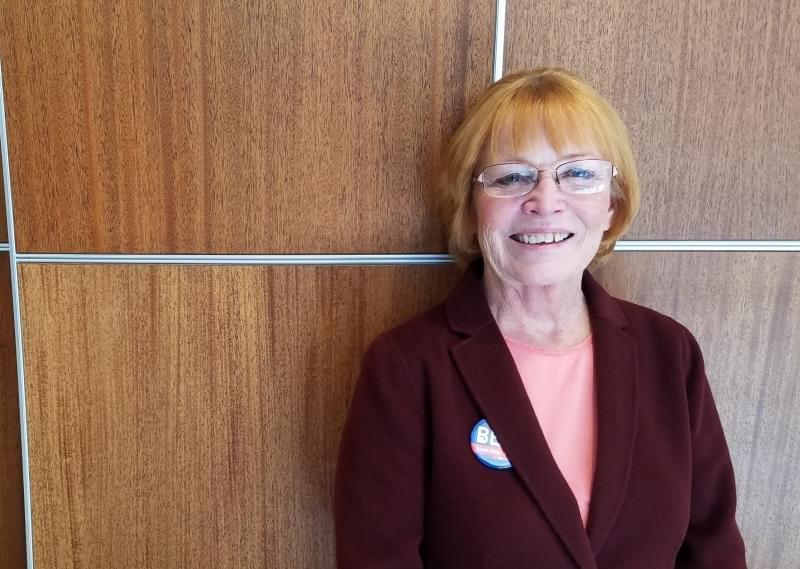 A Conversation with Shirley Bell, Democratic Candidate For The 110th Illinois House District