The Winnetka Republican delivered his State of the State address on Wednesday before lawmakers in Springfield.

Part of his plan includes raising the state's $8.25 minimum wage to $10 an hour over the next seven years. The issue has been discussed widely in Illinois, especially during in the 2014 race for governor.

Rauner was criticized for changing his stance at the time.

He tells lawmakers that raising the wage in conjunction with other reforms will help make Illinois more competitive.

Governor Rauner said the state must address what he calls "structural impediments" to economic growth.

"Our workers compensation, unemployment insurance and liability costs all rank among the worst in America," he said.  "Those costs add up to far more than just numbers on an accountant's balance sheet. They impact real people with real jobs and real families."

Rauner also wants lawsuit reforms, and changes to unemployment insurance and diversity guidelines for unions that contract with the state.

The governor also wants to hire more prison guards, reform the parole system and invest in a state program that keeps non-violent offenders out of prison.

He also says he wants to continue to invest in a program known as Adult Redeploy. It helps fund programs that divert non-violent offenders to community-based programs, rather than sending them to prison.

Rauner hasn't said how his administration would pay for the additional employees, or how much the new hires would add to the state payroll.

Senator Chapin Rose (R-Mahomet) called the address a ‘breath of fresh air’ with a list of doable proposals, like worker’s compensation reform.

Rose said he spoke with an Illinois business owner who pays $200-thousand more in worker’s comp premiums than he would in neighboring Indiana, limiting his ability to provide raises, hire new employees, and invest in his business.

“So I think what was really smart about the way the governor positioned the issue, he said ‘look Democrats… we’ll work with you," he said.  "I realize this is a big issue for you, but we’re going to have to do some things that make sense for people to create jobs so we have good opportunities for everybody.”

Rauner went after labor unions during his address.  Policies like so called "right-to-work zones" got a chilly reception from Democrats — and even some Republicans.

State Senator Sam McCann, a Republican from Carlinville, said he represents a lot of state employees.

"I nor none of my colleagues in the General Assembly work for the governor," he said.  "We work for the people, who sent us here to work with the governor and other members of the executive branch to make Illinois better."

McCann says many of his constituents view union membership as a path to a middle-class life.

But Senate President John Cullerton (D-Chicago) said Rauner has "squandered'' his major address before lawmakers, and that Rauner's speech was loaded with campaign rhetoric  Cullerton said the state has had many bipartisan successes, including overhauls to Medicaid, workers compensation, pensions and reducing a backlog of unpaid bills.

State Rep. Carol Ammons (D-Urbana) called Rauner's minimum wage proposal "a clear indication of how out of touch Gov. Rauner is with the day-to-day struggle working families in Illinois have to pay the bills, purchase food, afford quality child care, and have a reasonable quality of life."

A proposal that would bring the current minimum wage rate of $8.25 cents to $11 by 2019 easily passed an Illinois Senate committee Wednesday. It will now go to the full Senate.

Rauner Hints State Workers Paid Too Much, Shouldn’t Be Able To Strike

Eyes On Rauner As Popular Daycare Program Runs Out Of Cash 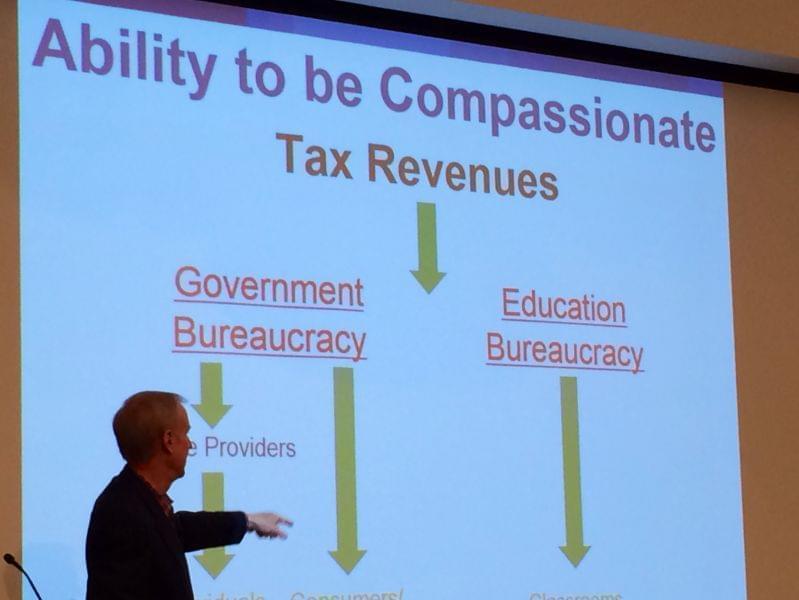