The candidates for Urbana mayor aired their agreements and disagreements at a debate Thursday night at the City Building. You can watch the debate on YouTube here.

Republican Rex Bradfield and Democrat Diane Marlin agree on some issues, like wanting to hire a city administrator and increase the size of Urbana’s police force.

But they disagree on some others, such as the city’s role in a legal battle over the tax-exempt status of healthcare provider Carle.

The Illinois Supreme Court heard arguments in the case in January. The city says charity care standards that qualify Carle for a property tax exemption are too lenient.

Bradfield said the legal dispute has frayed Urbana’s relationship with Carle, and hurts the city’s ability to attract other big employers. And he says if the Illinois Supreme Court rules in the city’s favor, the charity care that Carle currently provides could be in danger.

“Who’s going to replace the charity that Carle does?” asked Bradfield. "If you take their tax money and they say, well, fine, we’ll give you the tax money, and we’ll stop doing six to eight million dollars in charity.”

But Marlin says the lawsuit targets a 2012 state law on charity exemptions that she believes is a bad one, and should be replaced.

“We need to get language that is more fair to Urbana taxpayers”, said Marlin. “We could spread the cost of charity care over the region served.  You can cap the amount of assessed valuation that’s removed from the tax rolls.

The two candidates also differed on the wisdom of Tax-Increment Financing, or TIF, districts city building.

“We have a lot of empty spaces in downtown”, said Marlin. “And I would like to see increased housing downtown, more retail, more commercial space.”

Bradfield says the key to helping downtown Urbana is making sure there’s office space available to bring in employees with money to spend. But he doesn’t think a TIF district is the way to go.

“I hate government giving people money to develop in an area, and turning their back on the people that have been there forever, and they don’t get any money”, said Bradfield. "Where’s the competition?”

Bradfield is an engineer who is making his third run for Urbana mayor, losing previously to Democrat Laurel Prussing.

Marlin is an alderwoman representing Ward Seven on the Urbana City Council. She defeated incumbent Prussing and Evelyn Burnett Underwood to win the February 28th Democratic Mayoral Primary in Urbana.

The two candidates for Urbana mayor are on the April 4th municipal ballot. Their debate was sponsored by the League of Women Voters of Champaign County, the Champaign County NAACP and the News-Gazette. 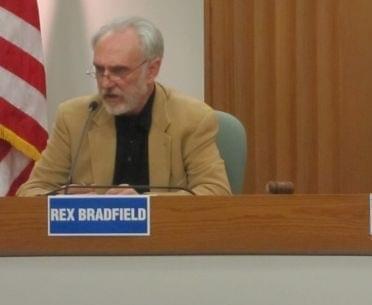