The University of Illinois has fired Athletic Director Mike Thomas. Barbara Wilson, the Interim Chancellor on the Urbana campus, said in a Monday news conference that a change in leadership was necessary after a series of investigations into allegations of player mistreatment in several sports programs.

In a statement, Wilson said Thomas, "has done a good job of leading through recent challenges," but that his dismissal lets everyone involved "move forward without the distractions" of recent months.

The U of I also released the results of two independent investigations by a Chicago law firm into claims that coaches in men's football and women's basketball abused players or mishandled their injuries. The first found evidence that former head football coach Tim Beckman violated standards and protocols, while the second found no evidence that women's basketball coach Matt Bollant mistreated players.

Speaking to reporters, Wilson reiterated that the reports found no misconduct by Thomas and no violations on his part of policies or standards.

“He has done a good job of leading DIA (The Department of Intercolleagiate Athletics) through recent challenges, and he is the one who actually requested the outside investigations," she said.  "However, it’s time to put the distractions of these past months behind us, and to put the focus back on the success of our athletic programs.”

Kowalczyk says he feels sad about Thomas’ dismissal, but felt an obligation to step up.  "He’s a class act," he said. "And we have good rapport, we have good conversations. I feel for the guy, and he handled things with grace and dignity.”

Thomas will receive a $2.5 million buyout because he's being released "without cause" under his contract.

The results of both outside investigations were released in a more than 12-hundred page report from the law firm Franczek Radelet. The first focused on the football program, and what led to the firing of coach Tim Beckman at the start of the football season August 28.

"Our investigation of sports medicine matters within the Football Program focused on the extent to which former Head Coach Beckman’s program pressured student-athletes to play through injuries or return to athletic participation too early after suffering an injury," the report reads. 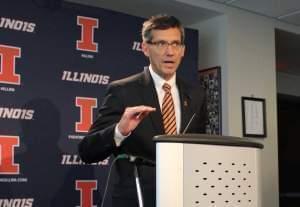 Thomas issued a statement in a press release posted to FightingIllini.com, saying he believes that the reports indicate he acted appropriately and   immediately when he learned of any issues related to the welfare of student-athletes, but that he accepts the situation.

"I believe it is a good time to turn the page and put the focus of this organization back on the success and welfare of our student-athletes," Thomas said.

Kowalczyk has served as Athletic Director at Southern Illinois University and Colorado State before coming to the U of I in 2012.