The Illini baseball team is one victory away from an NCAA Regional Championship, and three victories from reaching the College World Series.

They’ve won the first two games in the first-ever Champaign Regional, including Sunday's 3-0 shutout of Notre Dame, behind the pitching of Drasen Johnson.

He escaped early trouble, including a based-loaded jam in the first inning, and left two more runners stranded in the second.  But Johnson said he later settled into a rhythm.

“As long as I can get past the third, I usually cruise from there," he said.  "So I just limit bad pitches that I make early on, and get some key strikeouts when I have to.”

All three Illinois runs Sunday crossed the plate in the fifth inning, one of them on a base hit by Adam Walton.  He said his team is at its best when they’re aggressive – at the plate, and on the basepaths.

“We’re a veteran team, so we know we can and we can’t take the extra base, and a lot of times, especially in close games like these, taking the extra base is huge, push another run across or two," he said.  And we just did that today – we’re aggressive, and thankfully, it worked out for us.”

Eighth-place hitter Will Krug started the inning with a single, and scored on Ryne Roper's double to left.  Then Walton's base hit drove in Roper.  A fourth hit from Ryan Nagle drove Walton to third, and he scored on a sacrifice fly off the bat of Reid Roper.

“It’s a new person every day," he said.  "But if you look at the game winning hits, and the number of people that have come through in clutch situations, it’s one through 9.  And David's one of those 9.”

Illinois has beaten both Ohio and Notre Dame without having to use any relievers, including Big Ten Pitcher of the Year Tyler Jay.  The team’s 49th win equals their all-time high in victories, set in 1982. 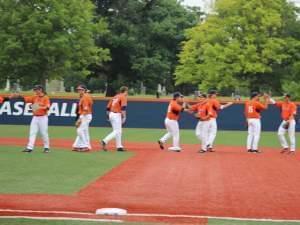 (pictured:  Illlini players congratulate one another after Sunday's 3-0 win at Illinois Field.)

Monday at 1 p.m. the Illini face Wright State – who eliminated Notre Dame in the late game, 4-0, after knocking Ohio from the tournament earlier Sunday, 8-3.

Should Illinois lose the game Monday, the two teams play another game about an hour after the first game to determine the regional champion.