A Backyard Lesson in the Birds and the Bees

This is a talk about the birds and the bees. But it’s not what you’re thinking. And it starts with a plant. The plant is known by the scientific name, Carex jamesii, but it’s commonly also called Jame’s Sedge, or Lawn Sedge. As the name suggests, Lawn Sedge looks much like the turf grasses people picture when they hear the word, “lawn.” It has slender, bright green leaves that grow up from the ground and get about seven inches long.

I realized some years ago that part of our back yard, which I had been mowing as if it were grass, was actually a stand of lawn sedge. So I stopped cutting it, and instead encouraged it to grow by removing the weedy competition, and accenting it with select native woodland perennials, including trillium and Virginia bluebells.

Over time, our stand of Carex jamesii has developed into the most beautiful part of our yard, and the pleasure of looking at it is increased for me by the understanding that the plants included there are all beneficial to the insects and other wildlife we share it with. Pollinators, of course, appreciate the flowers, but there’s also a long list of other insects that feed on those plants. 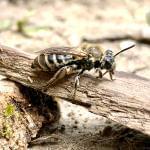 Here's where the bees come into this story. The sedge that I’ve been talking about grows in clumps, leaving small patches of bare soil in between. And these patches of bare soil are important for another of my yard favorites, digger bees, which you may have noticed without knowing what they were on recent warm, sunny days. Unlike honeybees and bumblebees, which live in colonies, digger bees generally live on their own, but they create a mini-wildlife spectacle of sorts in early April, as swarms of males seeking to mate hover over the ground where females are emerging. 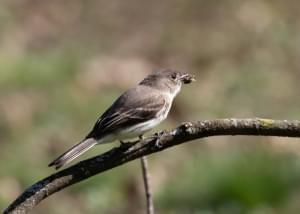 Since I learned what they were, I’ve always enjoyed seeing the activity of digger bees in April just because. But having extra time to observe them this spring, I’ve learned a new reason to care for them—they bring songbirds to the yard.

As a result of the pandemic, I’ve been doing my teaching and advising from a small office on the side of our house, which has sliding glass doors and a view of the sedge stand. As the digger bees became active there, I noticed certain birds were hanging around as well—especially an Eastern Phoebe and a pair of Hermit Thrushes.

What a convenient opportunity for bird photography, I thought to myself. So I placed a small chair with a blanket draped over it next to the door, to give me some cover, set up a downed branch in just the right spot, for the birds to perch on, cleaned the track for the door, so I could open it silently, and waited.

Throughout the day the birds came back, and each time I had a chance, I’d slide open the door to shoot a few pictures. In the process, I realized the birds were coming there specifically to eat the digger bees. They would catch one and carry it to a low perch against which they could kill it. Then, as I also learned, they even removed the stinger by wiping their prey back and forth against the perch.

While your yard probably doesn’t have the same mix of life that my yard does, I’d encourage you to give yourself some time to watch it as spring progresses. Who knows, you might learn something about the birds and the bees yourself.