For birders, a family tour on a new continent opens up worlds of possibility.
Rob Kanter
Listen
Download

The city of Dakar, which is the capital of the West African nation of Senegal, is not a birding destination. Some two and a half million people live there, and the streets are crowded with traffic that includes everything from people on foot and horse drawn carts, to motor scooters, taxis, private cars, and a variety of buses, among them the colorful and jam-packed cars rapide.

But Dakar is home base for my daughter Jane, a UI junior majoring in Global Studies who is studying in Senegal for the academic year. So that’s where our family’s two-week visit with her over the recent holidays began, and where I had my first opportunity to see African birds. 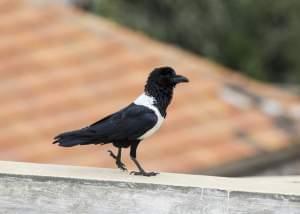 On the cab ride from the airport to our hotel, I was amazed to see that the skies over the city were filled with large, soaring birds of prey that were unlike any I had seen before—dark brown both above and below, with a deeply forked tail they used as a rudder. These were easy enough to identify in my field guide, which I’d gotten last fall and spent time browsing in anticipation of our trip; they were yellow-billed kites. As you might expect from a bird of prey that can live in a city, yellow-

billed kites are described as “extremely opportunistic” feeders; they eat everything from insects and small vertebrates to food scavenged from garbage and carrion.

One of the great pleasures of birding is the way it expands a person’s engagement with the world. Nonbirders looking out from a high window in a city on a new continent may enjoy the view of the architecture or the people in the street, but birders immediately begin expanding their catalog of “life birds,” whether they keep that list written down or in their head. 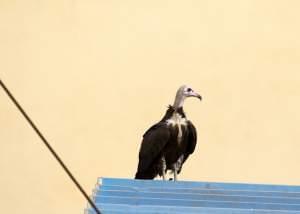 From the sixth floor of the Hotel Faidherbe I discovered that some of the large birds soaring over the city were not kites at all, but hooded vultures, which were also new to me but easy to identify thanks to my book. There were gregarious flocks of crows in the sky, too, although unlike the uniformly black species we’re accustomed too, these sport white on the chest that wraps around their shoulders and back to give them a distinctive collar; they’re called pied crows.

One of the most productive bird habitats I encountered in Dakar was the oasis around our hotel’s pool, which was located in a courtyard surrounded by high walls that were hung with bougainvillea vines. There I saw for the first time laughing doves, which are a more colorful analog to our mourning doves, and common throughout much of sub-Saharan Africa. Late in the afternoons the doves would be joined by noisy flocks of house sparrows and related weaverbirds, as well as some that seemed more exotic (to me, anyway), prettiest among which were red-billed firefinches.

Now, we’re getting near the end of this commentary and I haven’t gotten beyond the city where we landed in Senegal, despite the fact that the best birding of my family’s tour in the country took place during stays in more natural settings. I’ll follow up some on that next week.