One of my favorite days of the year

Nobody enjoys the annual spring bird count in Illinois more than I do
Rob Kanter
Listen (Duration: 4:00)
Download

The hour before sunrise on the first Saturday in May finds me in the same place most years. That’s standing on a bridge over the Sangamon River north of Mahomet with my friend Greg Lambeth, playing a recording of a Whippoorwill’s call in hopes we’ll get one to call back. In 15 years of trying (for me—more for Greg) that has never happened. That doesn’t mean we’ll quit trying, though, because the first Saturday in May is the day of the Illinois Spring Bird Count, and adding a Whippoorwill to our list of birds observed would be something of a coup.

The count is coordinated by the Illinois Natural History Survey, a division of the Prairie Research Institute based at the UI in Champaign. It began in 1975 and generally covers all 102 counties in the state, although it’s not unusual for some counties to be missed in any given year.

In addition to checking for whippoorwills before dawn, Lambeth and I are also listening for owls calling. We never fail to find barred owls in the wooded corridor along the Sangamon, and usually get great-horned owls, as well as an occasional screech owl, too. 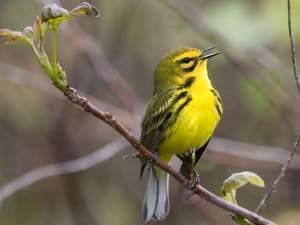 By the time the sun rises, the songbirds have gotten into the act. These include residents, like American robins and cardinals, as well as the many migrants that are passing through central Illinois at this time of year.

Unlike the Christmas Bird Count coordinated by the national Audubon Society, wherein relatively large numbers of participants census relatively small territories, the spring count in Illinois involves fewer people and many of us cover quite a bit of ground.
Over the course of the day, Lambeth and I go from River Bend Forest Preserve south of Mahomet up to Fisher, with stops at Lake of the Woods in between. By late afternoon we head east to Rantoul, and then go on to the Middle Fork River Forest Preserve near Penfield before returning to Champaign-Urbana.

The reason for all of the driving is to survey different types of habitat. So at River Bend, for example, there’s the deep lake where we saw not one but two common loons, as well as the wooded corridor along the Sangamon, where we usually find great numbers of warblers, although that was not the case this year.

Along the roads north of Mahomet where there are still some expansive cattle pastures, we look for species of birds that nest in grasslands, such as bobolinks and meadowlarks. Because grassland habitat is declining across the state these are some of our most threatened species of birds.

We also check Stidham Marsh at Lake of the Woods for marsh birds—such as the marsh wren—and waders—herons or rarer things like bitterns. And wherever there is standing water we stop to check for migrating shorebirds. Our best shorebird spot of the count was a flooded bit of cornfield we came upon in the last light of the day, where we added five species. That brought our species total for the count to around 120, which is far from a record, but still a lot of different birds.

No wonder the spring bird count is one of my favorite days of the year.