UPDATE:  U of I Student Was Killed As Part Of Armed Robbery

The two suspects are identified as 21-year old Daniel Gonzalez of Cicero and 21-year old Reginald Scott of Champaign.

Champaign County State’s Attorney Julia Rietz said Mundo was shot and killed when trying to escape during an armed robbery last week over marijuana and cash.

Both suspects arrested Monday - 21-year old Reginald Scott and 21-year old Daniel Gonzalez -  were each charged Tuesday with three counts of first degree murder, and are being held on $2-million bond.

Rietz said based on interviews with both defendants, the two men planned to rob Mundo, a U of I junior from Chicago, during a sale of the drugs in the parking garage of his Campustown apartment.

Rietz said because Scott is alleged to have fired the gun, he faces 45 years to life in prison.  Because Gonzalez is charged as an accomplice, she said Gonzalez faces anywhere from 35 to 75 years.

The two suspects are both students at Parkland College in Champaign, confirmed by Parkland spokeswoman Patty Lehn.

Walsh said Mundo’s disappearance over a week ago helped them locate the suspects.

“His friends and acquaintances were interviewed last week," he said.  "After Mr. Mundo’s body was discovered and then identified, our investigators, along with CPD and U of I PD, used that information and then ended up re-interviewing a Daniel Gonzalez.  He made various admissions."

Walsh said after search warrants were obtained, the same happened with Scott.

The handgun believed to have been used in the crime was recovered Tuesday morning.

A car belonging to Gonzalez has been seized from the U of I campus. Rietz said Mundo's car was discovered in the parking lot of Gonzalez's apartment.

Champaign Police Chief Anthony Cobb praised the efforts of all police agencies involved, as well the as the public's efforts in the last week.

“There were several people in the public that helped us, the family was helpful with us," he said.  "And that was the difference in being able to solve this case quickly.  So we thank the public for coming forth with information.  We do recognize we have one missing student that we’re still concerned about as an isolated incident from this one, but we wanted to point out we’re still looking.”

Cobb is referring to the disappearance of U of I graduate Christian Zamora, who was last seen on New Year’s Eve. 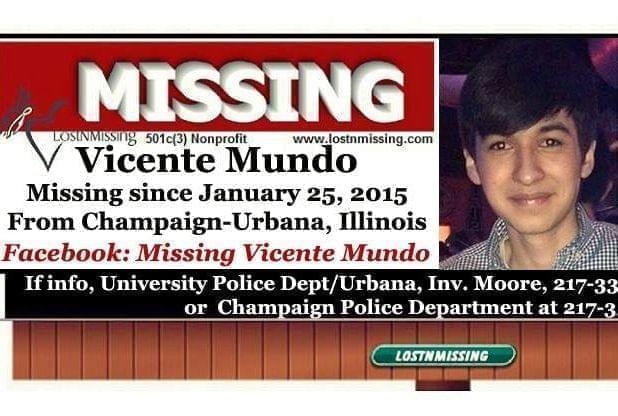 Coroner: Body Identified As Missing U Of I Student