Urbana musician and Central Illinois native Nic Dillon never saw himself as having a regular day job.  Now, the self-described 'mechanic' of harmoniums may never have one again.

“I never idealized that I would work in an office, in a full time job of that variety,” he said. “I’ve always wanted to do something on my own.”

Nic now makes a name for himself – not through performing, but helping others do a better job of it.

Through trial and error, and innovation, Dillon’s work has meant a lot other musicians simply looking for a new challenge.

Dillon was brought up on drums and guitar, but says he developed a fascination for the harmonium while in college.  He likes the atmosphere it creates, calling it organic, warm, and ambient.

The acoustic instrument sounds a bit like an accordion, and like it, has a keyboard, but one hand has to pump air through the back.  But harmoniums are temperamental. 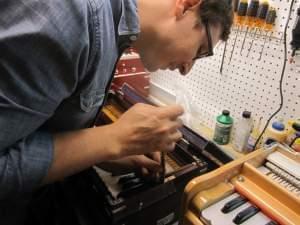 A few seconds after piddling with one of the 100 or so of them in his basement, he gets a 'buzz' sound coming from a Bina, the India-based manufacturer of the best-known line of harmoniums.

But to Nic, it's easily something that can be remedied with standard tools like a screwdriver and pliers, along with a diamond file.

After splitting the last few years between prepping and repairing instruments, and a day job doing IT work at the University of Illinois, Nic recently gave up the U of I gig, and is devoted solely to helping harmoniums sound better.

Now more of a 'mechanic', Dillon also performed for a number of years, playing the harmonium (among other instruments) on stage, and in the studio, recording with wife Heather as the ensemble You and Yourn on Urbana-based Parasol Records.

The Dillons met while students at Illinois State University.  They were introduced to the harmonium during a class on Asian music, including a portion of it devoted to India.

Nic and Heather later moved to Urbana with the intent of making more music.  But Nic said what began as a side project evolved as demand for harmoniums grew.

For a while, Heather said he was essentially spending his days at the U of I, and most nights working in the basement.

When they became parents, she gave him an ultimatum.

"So I think there was a point at which I said – 'you need to make a choice with what you’re going to do with your life," Heather said.  "Either figure out how this harmonium business is going to work out – be more than a side business -  or, give it up, figure out how to sell it.”

Two months ago, Nic gave up his day job at the university, and found there was still plenty to do.

At any given time, there are about 100 harmoniums in his basement to be worked on, or shipped out.  Nic said it comes with acoustic instruments, made of wood and metal that bends and flexes, and changes with the climate.

“If you have a pinhole kind of size air leak – that instrument’s going to be fundamentally changed as far as the performance – so someone’s got to figure out where that pinhole sized air leak is, and seal it,” he said.  “And then suddenly, it’s night and day difference between what you had, and what you have now.  That’s always been the case.   You know, if you buy a piano, you’re going to get it tuned, right?  If not, it sounds like junk.”

Dillon said ‘tons’ of people encounter the ‘buzz’  he got from the Bina when ordering harmoniums – often from overseas.

He said a lot of people order their harmonium direct from sources like Amazon, paying at least a few hundred dollars to begin with, then find him online and pay a bit more to get it working right, realizing they would have saved in the long run by buying from him in the first place.

Most harmoniums are shipped from overseas, and he then sells them domestically.  He doesn’t work with anyone in Central Illinois, but that customer base is always expanding.

Harmoniums are often connected to Kirtan, a call and response kind of chanting meant to heal the mind.

Yoga Teacher Liza McCormick says playing and hearing the harmonium lowers her blood pressure – and brings out a sound that she connects with.

She said it’s a blessing to have found someone as dedicated as Dillon to buy instruments from and help those like her further their craft.

And if they’re damaged, Liza said it’s not as if they can be taken to just anyone.

“They’re very sensitive instruments, and so they’re sensitive to humidity,” she said.  “They don’t take well to being knocked around.  So I’d accidentally knocked this one – and it had several big cracks in the baseboard.  So Nic gave it some TLC and it’s back to its former glory.”

Nic’s even gotten his son involved in helping him tune. 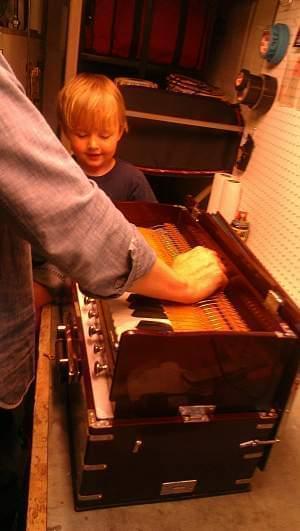 Dillon said he and wife Heather are hard workers, but also envisioned the two of them doing something together.

“To us, in our 20’s, we had enough musical connections, the thing that made the most sense was to go with that momentum.  Because we’ve gotten to see the whole country many times over, and make all these friends that we wouldn’t have made,” he said.  “It was terribly impractical, and I think our families thought we were kind of nuts, but they’ve just gotten used to it.”

With two kids and other another on the way soon, Nic admits devoting his time solely to working on harmoniums was a bit of a risky move, but one way or another – through referrals or his website, Old Delhi Music – he’s found a way to stay busy in his basement, bringing acoustic instruments to life.

"And I get to be a part of that process by getting these things performing the way that they can – and then pass them on to someone else, and they just take it the rest of the way," he said,  "So it’s a unique skill to be able to do that, and exciting, and it’s also humble.  ‘Cause I’m down here doing stuff that people don’t really see.”

Nic’s even started his own line of harmoniums – partnering with a manufacturer in India, selling to more retail outlets.

(all photos by Jeff Bossert/WILL)