Robert Putnam: Growing Inequality Threatens The American Dream, But We Can Still Fix It

The American Dream is in trouble, inequality is growing, and the biggest divide is in education. So says Robert Putnam and he believes he has the research to prove it. Illinois Public Media’s Scott Cameron spoke to him recently and they discussed what is causing this problem and how we can fix it. 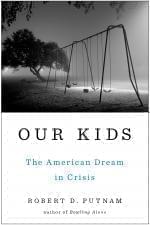 In Our Kids: The American Dream In Crisis, Putnam examines why fewer Americans today have the opportunity for upward mobility. He tells Cameron that the rising inequality gap in the United States will be the major issue leading up to the next election, and if we don't tackle it soon this growing class divide will hurt everyone, regardless of class. "The big picture is the same every place," says Putnam. '[There is] this growing gap between rich kids and poor kids that threatens our national prosperity, threatens our democracy and just violates the core values of America."

His definition of rich and poor kids is different than you might think. For the purposes of his study and book, Putnam describes rich kids as the children of parents who have a college degree and, thus, often have the resources to give their children help and opportunities. Poor kids are defined as those kids whose parents have at most a high school diploma -- if that.

"The most important unifying theme of the book is how isolated poor kids in America today are from basically all important social institutions -- their families are unstable, they don't have good connections with schools, or churches, or community institutions or kids organizations," says Putnam. "These kids are really isolated and they feel surrounded by malevolent forces. And almost without exception they do not have stable, reliable adults in their lives."

Putnam says we have to help them, and when we do -- all of us will be better off.

Robert Putnam will be speaking in Chicago on Wednesday, March 25, at 6 pm at the Harold Washington Library.