Why Aren’t There More Options For Voters In Illinois?

When Illinois voters go to the ballot in November, many will find that they only have one candidate listed on their ballot for some offices. Illinois has a larger percentage of these uncontested races for its state legislature than many other states that are similar in population size.

Springfield resident Casey Becker get’s frustrated when he that a candidate is running for office without opposition. “It angers me. I just don’t understand how’s there not a candidate. From at least two of the main parties if not more.”

When there’s only one person running for an office, he takes it upon himself to be the second option—at least on his own ballot. “If there’s not a legitimate write-in candidate, I will write in myself.

Casey says he knows writing himself in is “kind of ridiculous,” but that hasn’t stopped him from doing it. “It’s ridiculous, because I’m not really technically in the race. I know that the person who’s running uncontested is going to win if there’s not a legit write in candidate. So I kind of look at it, and I think what I’m thinking is, this person is running against no one. Well, I’m better than no one. So I’m going to put myself in there.”

The Illinois Campaign for Political Reform crunched the numbers and found that out of the 158 seats in the General Assembly that are up this year, 62 have at least two candidates running for them. The group compared Illinois to five other state's similar in population size. (A chart showing the comparison can be seen below). 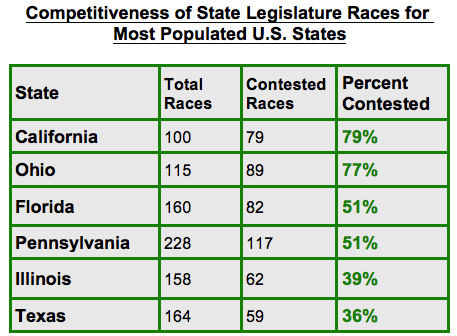 Sarah Brune, executive director of the Illinois Campaign for Political Reform, says that changing the way legislative districts are drawn in the state could lead to more contested races. Her organization backs a proposed constitutional amendment that would take the map drawing out of the hands of lawmakers and instead give it to an independent commission.

But, he says if one party has the power to control the map, some of the strategy used for partisan advantage creates districts where you there is unlikely to be a competitive race in the general election, because they lean so heavily to one party or the other.

Mooney also keeps tabs on what’s happening in other states. And he says that in the few states that use independent commissions to draw legislative maps, competitiveness does seem to have increased. For instance, California only saw one seat out of its state legislature and Congressional delegation combined flip parties in a decade. After the state moved to using a commission, more seats have changed hands between the parties.

That Illinois Campaign for Political Reform analysis found that California was the most competitive for  state legislative races out of the six the group looked at. Ohio was number two. In both states, more than three quarters of the seats up for election have contested races. And both states have something else in common: term limits.

“If you have term limits, you’re going to have some incumbents who are not eligible to run, and that was a very big factor in what made those numbers so high,” Brune says.

She says that making it easier for independent and third party candidates to run in Illinois would also lead to more contested races. She notes small mistakes on paperwork to file as a candidate, like putting a staple in the wrong place, can get a bid for the ballot tossed out.

I asked voter Casey Becker if he would like to see more independent and third party options on his ballot. “I would like nothing than that,” he says. “I definitely think it would change the conversation. It’s got to start somewhere, and getting people on the ballot is the first step.” 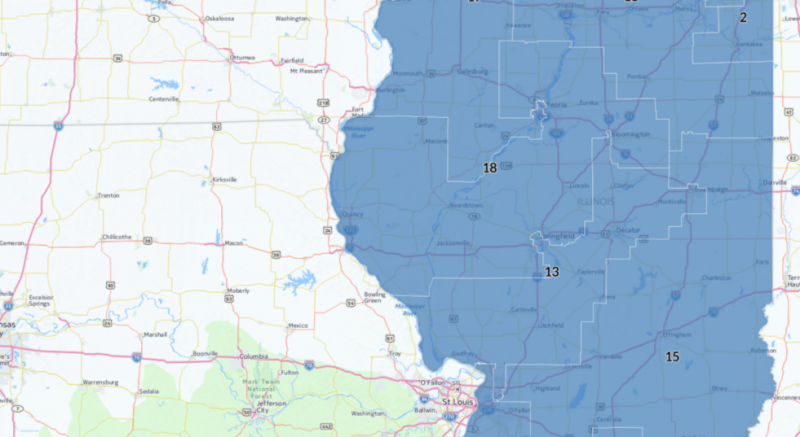 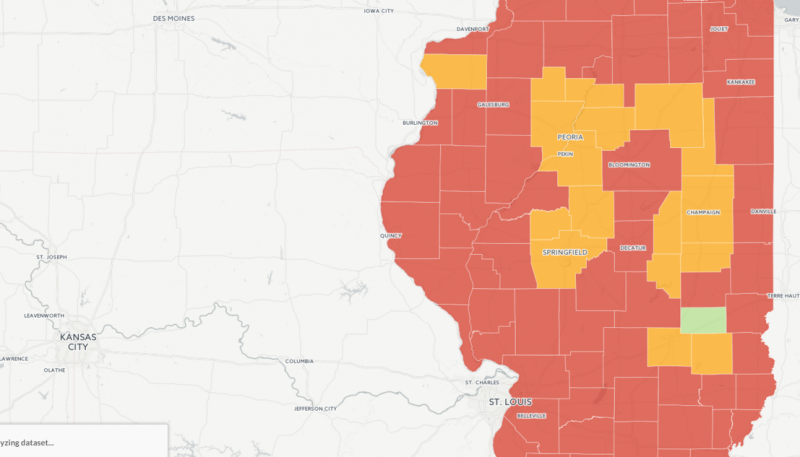